"The Mississippi Chess Association is yet in its babyhood. Born in 1899 it has steadily grown and now numbers about one hundred members. In a few years it will probably near the thousand mark. What it lacks at present in numbers it makes up in enthusiasm. None but those who derive a genuine enjoyment from chess belong to it. Nor does it hold out any inducements to its members but the pleasure afforded by the game. The greatest honor it can bestow—the office of President—is annually won in the championship tourney, the best player, like the worthiest citizen in a republic, being elected to the position as a matter of course. One tournament is played each year, preferably in vacation time and always at some summer resort. 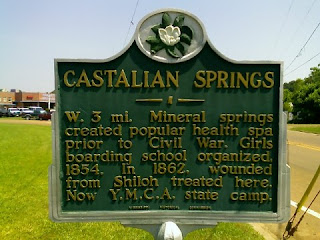 As a starter they played a match against nine members of the Memphis Chess Club, in which Mr. Jefferson captained the Memphis team and Mr. McGrath led the Mississippi players. Hurrahs for Mississippi proclaimed the result of the first two games finished but Memphis pulled bravely up and finely won by the good score of 6 to 3.


After this intermezzo the tourney began in earnest. Out of the total of twenty-five players about ten soon proved their prominence, notably, Messrs. Ed. Hill, last year's champion, McGrath, twice a champion in previous years, Aimes, McCabe, Judge Moody, Smith, Julian, Moody, Carothers, the Lt. Governor of the State, Mr. Harrison, and others. The games proved to be very brilliant, marred only by deplorable blunders which seem unavoidable with those where practice is very limited. There was a refreshing absence of the conventional in the manner of play, the time of play being filled up by a conversation on all kinds of topics in which also onlookers freely participated. The utmost good nature prevailed throughout and the referee, in which capacity I had the honor to act had no more to do than to decide technical points.
King Sol was in a lenient mood and at no time sent the thermometer higher than 95 degrees. The evenings were made resplendent by the beautiful moon of the South, in comparison to which his brother of the North is very pale.

Imagination roamed at will in the evenings, when even the distant points shone up in a mysterious light. The gentlemen of Mississippi are good talkers, and Mr. Harrison is one of  the best. On several of the evenings, out in the garden he was so good as to tell of a few personal reminiscences. There was a large crowd of listeners who sent forth merry peals of laughter. . .

In this way the days and nights of the chess week went enjoyably by. At last it was seen that the championship honors could only be won by either Mr. Aimes, Mr. Hill or Mr. McGrath. Mr. Aimes had lost 2 1/2 points, Mr. Hill and Mr. McGrath were minus 1 1/2 points. A desperate fight between Messrs. Aimes and Mc Grath ended in a draw, thus throwing Mr. Aimes out. The fatigue of this game, which lasted a whole day, proved too much for Mr. Aimes, who speedily lost his next encounter with Mr. Hill. The supreme effort between Messrs. Hill and McGrath was worthy of the occasion. McGrath opened with the Queen's Pawn and arranged his pieces in a strategically almost perfect order which is the creation of the masters of this generation. Ed. Hill defended until he espied a hidden weakness in his adversary's position that enabled him to open the counter attack by throwing his Q side pawns forward.

A stubborn fight ensued in which Ed. Hill pressed forward in the centre and McGrath tried to get his forces away to the K side for attack against the black king. But he could not get his heavy pieces in position and had to agree to a draw. Consequently Hill retains the cup for the year."

Posted by Chess Advocate at 7:28 PM