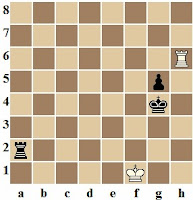 Play through missed endgame wins and missed draws by some of the up and coming players of the Memphis Chess Club.  Here is an excerpt from the site:  "This is a key position. Black may have a passed pawn, but this is a typical Philidor`s Analysis. If the white king can get in front of the pawn then the game is drawn; if he can not then black should be able to create the Lucena Position and win the game. The interesting thing is that white has only one correct move; all other moves lose. In the actual game, white moved his rook to c6 and lost the game. Let`s see what would happen if he had played the correct move.

No matter what black does now, the game is a draw.

With Kf3 black threatens a back rank mate.

If he advances the pawn it can not be promoted. Lets see what happens if he tries.

Black has two choices: move his king in front of the pawn threatening a back rank mate, or move away from the pawn, and be exposed to perpetual checks by the rook.

There is no way to promote the pawn or to deliver a back rank mate. The game is drawn. This is what C. K. should have done. This is one of the key technical ideas that every competitive chess player should know.
Rule: Do not allow your rook to become passively placed. The Philidor position (or Philidors position) usually refers to an important chess endgame which illustrates a drawing technique when the defender has a king and rook versus a king, rook, and pawn. It is also known as the third rank defense, because of the importance of the rook on the third rank cutting off the opposing king. It was analyzed by François-André Danican Philidor in 1777. Most rook and pawn versus rook endgames reach either the Philidor Position or the Lucena Position if played accurately. The Philidor position is perhaps the most important position in endgame theory. A general rule of thumb: if the king on the side without the pawn can reach the queening square of the pawn, the game is a draw; otherwise it is a win for the opponent (except with a rook pawn). The side with the pawn can cut off the opposing king or strive for the Lucena position, which is a win. The Lucena position is one of the most famous and important positions in chess endgame theory, where one side has a rook and a pawn and the defender has a rook. It is fundamental in the rook and pawn versus rook endgame. If the side with the pawn can reach this type of position, he can forcibly win the game."
On the web site the diagram board is automated much like the "Game of the Day" chess board.  All you do is sign up at the link mentioned in the next message below.
Posted by Chess Advocate at 7:18 PM