The Art of Chess

Former Memphis Chess Club Member, Randy Cope, knows how to express the art of chess.  His inspired, original graphic designs were featured on the covers of the Mid-South Chess Advocate and Tennessee Chess News as well as on eye-catching tournament fliers.

TD Gary Pylant treasured two of the artistic 1983 TCN covers so much that he saved two issues in hope of having the images printed onto T-Shirts.  Last year I printed out two T-Shirt transfers from those magazine covers making Gary's 27-year-old wish come true.

Today you can find Randy, after having gained many years of experience in the marketing and advertising business, as owner of Cope Design.  I talked with Randy for almost an hour recently, and he said that he was just finishing up a design of chess piece boxes for one of our former city champions, Sid Pickard.  Sid and his wife own and operate Chess Central, a web site for chess equipment based in Charlotte, N.C.  (http://www.chesscentral.com)  Continuing with more of my conversation with Mr. Cope, Randy said that he will look around his files and send me some more artwork to add to this post later.

At the beginning of his chess career in Memphis, Randy Cope's name was mentioned for the first time in the March 1978 issue of the Mid-South Chess Advocate where he played in the city's 7th annual amateur championship.  (http://www.memphischess.com/AdvocateMarch1978.html)  Within a couple of  years after joining the Memphis club, he had become the editor of the Mid-South Chess Advocate, and immediately began modernizing the periodical's appearance.  The Advocate previously had not changed formats since its founding in December of 1974.  Below are some of Randy's published graphic designs: 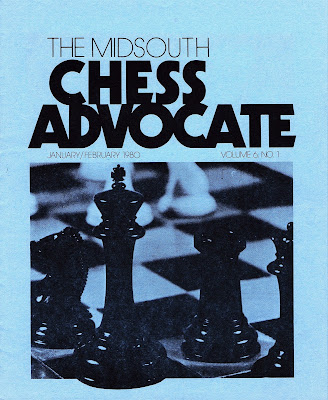 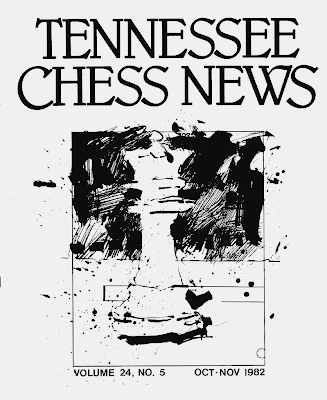 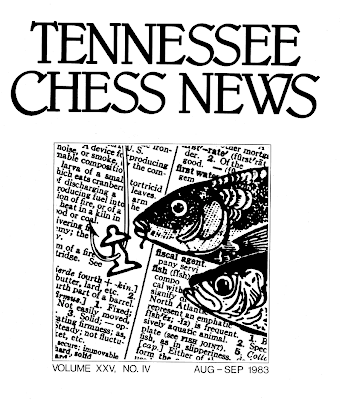 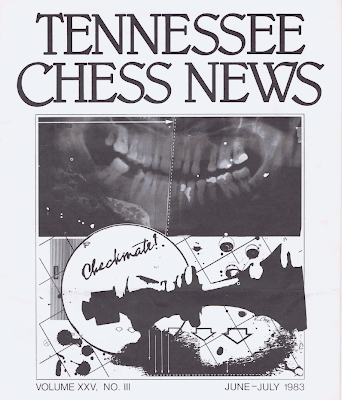 
The Memphis Open (formerly the Memphis in May Open) was held Memorial Day weekend at the Quality Inn-Airport in South Memphis.  The tournament received no advertising in Chess Life yet managed to attract 44 entries (10 less than last year's Memphis in May Open which boasted $1300 in guaranteed prizes).  Carl daCunha (Memphis) and Ron Burnett (Nashville) co-championed the two-day event and shared top money, although daCunha won the first place trophy on tie-breaks.  Burnett's last round victory vs. Candidate Master Johnson Moore (Nashville) allowed him to catch up with daCunha who was held to a draw by chess master Brian McCarthy (Nashville) after having won his first four games.  (Click "Read more" below.)

Both Carl and Ron have been leaving their marks on Tennessee chess events in recent months.  DaCunha, a medical doctor and a native of Brazil, just moved to Memphis a couple of years ago.  While in Brazil Carl "sparred" with Grandmaster Mecking on occasion, and from the looks of things he must have learned a trick or two.  This year alone Carl has qualified for the Memphis City Championship, won first place on tie-breaks in the Bluff City Open, and has now won a share of the Memphis Open title.

The tournament was directed by Jim Gallagher, Sr.  The Memphis Chess Club sponsored the event.
Games from the 1983 Memphis Open:
(Click the bar above the black pieces to choose a game.)
Posted by Chess Advocate at 8:43 PM