The Peabody Hotel and Memphis Chess 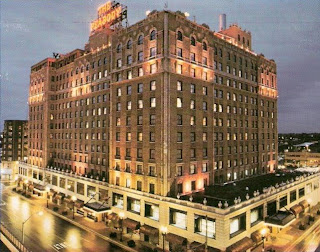 The Peabody Hotel, which is on the National Register of Historic Places, was for the Memphis Chess Club a great playing site in the 1970's.  The 4,256 square foot Venetian Room the club used held a very large tournament and you could enjoy the seating in the lobby while watching the Peabody ducks between rounds.  For current information, go to the Peabody's web site: http://www.peabodymemphis.com/ 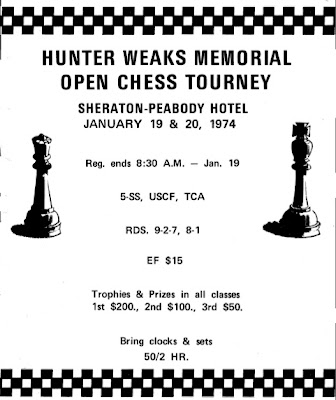 Blog editor:  My first USCF rated tournament was this 1974 Hunter Weaks Memorial, and I was entry number 59.  I won my first round game and lost the next four afterward.  It is still a fond memory.

Selected Games of Hunter Weaks - published by the Memphis Chess Club.  The first book ever published on chess in Tennessee.  A fine tribute to a great player who had a vital influence on chess, not just in Memphis, but also in Tennessee, and the South in general.  The biographical sketch is well written by players of the Memphis club.  It gives insight in Hunter as the player and also as an individual in other interests, such as classical music and Shakespeare.  The fine selection of games are accompanied by excellent annotation, sometimes even with Hunter's own ideas and analysis.  It includes simultaneous exhibitions against U.S. Grandmasters Bobby Fischer and Samuel Reshevsky, and Yugoslav Grandmaster Trifunovic.  Also, you will find several games he played in postal chess in which he excelled and also in blindfold chess.  In addition there are games against other Memphis players such as B.B. Jefferson and Uncle Bob Scrivener who gained national prominence in their prime. (review by Peter Lahde)

(Note:  An online version is of the book is available at the Memphis Chess Club's Archive link:  http://www.memphischess.com/Selected-Games-of-Hunter-Weaks.html)
Posted by Chess Advocate at 9:00 PM