The Mid-South Open / The First One 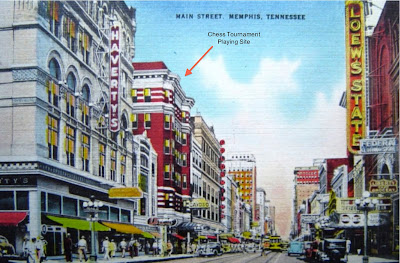 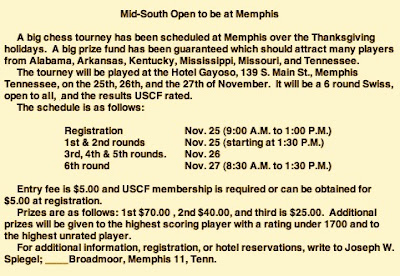 This tournament was well organized and directed by Joe Spiegel, Clif Lipman, and Bill Wiseman (all of Memphis).

The event attracted 31 players (same as the Tenn. Open) of which 17 are members of one or the other Memphis chess clubs. (Quite a record I might add, The TCN editor). Twelve players came from other states, and only two from other parts of Tennessee, they being from Nashville.

Some $135 dollars were awarded in prizes.  In addition special prizes were given in forms of chess books, USCF pins, and a chess board.

Here are the scores of the top twelve players in this event.


Unfortunately a complete listing of all participants did not become available in time for this issue. 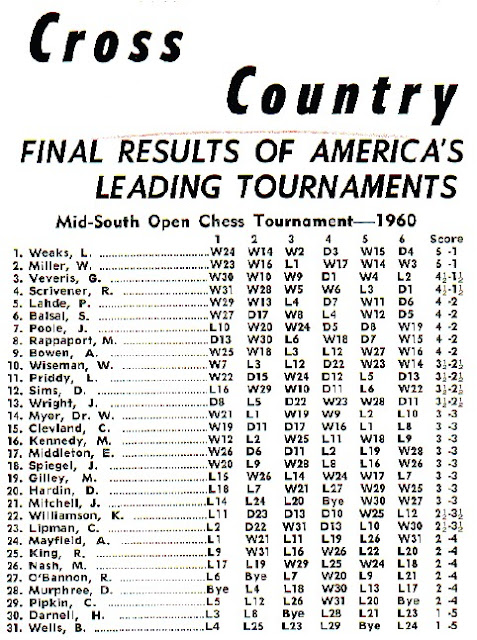 This TCN newsletter reported 34 chess players took part in the TN Open.  Robert Coveyou came in first with 5½ points and Hunter Weaks placed 2nd with 5 points.  Whitaker, N.T., Washington, D.C., Hartleb, Glenn, Washington, D.C., & Stevens, Chas., Baltimore, Md. shown as forfeiting their first round and then in the second round having withdrawn.

USCF Member Glenn Hartleb of Washington, D.C., was killed in an auto accident in Russelville, Arkansas returning from the U.S. Open at San Francisco and en-route to the Tennessee Open at Nashville, last month.  Originally from Erie, Pa., he resided in Washington, D.C., where he was employed as an accountant.

Glenn was a former USCF Membership Secretary--in the days when there were no salaries paid but plenty of hard work to perform.  He competed in every U.S. Open Championship since Pittsburgh, 1946. . . One of his "trademarks" was his greeting to every player: "Master!" whether the player was actually a Master of just another woodpusher.  He himself maintained a high Expert's rating . . . very close to Master's title but never quite made it.  Calculating his rating from his past two performances, the U.S. Team Championship and the U.S. Open, the USCF Rating Statistician has informed us of a sadly ironic occurrence.  Hartleb's rating jumped to 2196 from his performance at Raleigh and his 7½-4½ at San Francisco gave him exactly what he needed to earn the magic number of 2200.  After all these years Glenn is a Master but he'll never know it. 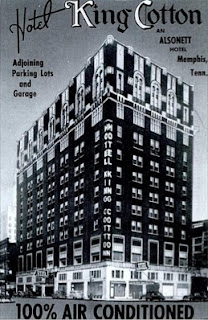 This event, sponsored by the Memphis Chess Club, will be held at the King Cotton Hotel, 69 Jefferson, Memphis, Tenn. on the 24th, 25th, and 26th of Nov. 1961.  It will be a  6-round Swiss System tournament, open to all, and results will be rated by USCF.  The schedule is as follows:

John Ragan, of East St. Louis, Ill, took with a clean sweep the strong Mid-South Open held . . . at Memphis.  The event attracted 27 players, including a master, two master emeritus, and two experts.  In addition 9 players participated in the amateur division.

Behind John Ragan, tied for second and third with 4 ½ out of 6 were Richard Long of Nashville and Ed Middleton of Memphis.  This tie could not be broken by any of the three tie breaking systems applied.  Fourth was Norman T. Whitaker of Washington, D.C. also with 4 ½.  Fifth through seventh places were taken by John Hurt of Memphis, James Wright of Millington, Tenn., and Louis Stephens of E. Alton, Ill.  Hunter Weaks of Memphis, last year's winner, only scored 3 ½ points for 9th place behind Morton Rappaport of Wynne, Ark. who also had 3 ½.  Also Uncle Bob Scrivener had the same score to take 10th place.

Bob O'Bannon of Memphis won the Amateur division with 5 ½ points.  An indication of the strength of the Open event is given by the fact that Troy Miller of Natchez, Miss. could only win one game and had to settle for last place.  Last year he tied for first with Weaks in this event and took second only after tie breaking.  On the brighter side, Norman Whitaker was able to play in the tourney after being involved in a serious car accident, although he had to play from the Shrine Hospital in Memphis.

For the tourney record from this event see this link:
http://www.memphischess.com/files/TCN/TCN1961/TCN-November-December-1961-pg2.pdf
Posted by Chess Advocate at 10:31 AM