Battles of Kings, Queens and Daredevil Knights is an Everyday Occurrence in Downtown Memphis

The carnage is terrific at 1028 Falls Building.  In what is probably the quietest of all rooms in the building, whole armies daily join in combat, charging, recoiling, rallying to charge again.  Until a voice cries "Checkmate!"  and the battle's done.

Members of the Memphis Chess and Checkers Club find it difficult to remember that the ancient and honorable "Game of Kings" is after all, just a game.  Walk into their bare and dusty little room and watch them, a group of old cronies crouched over the board.

Their ears are still stunned to the rapid clack-clack of checkers across the room.  Their eyes are slitted against the swirl of tobacco, which has not yet become the smoke of war.

And suddenly they are no longer players.  They are not even generals.  Like the ancient gods, they lean over the parapet of clouds to observe, with amused detachment, the hurly-burly of the fray.

The blocks have become warriors.  Far below, an ill-armed foot soldier pushes doggedly through the smoke rifts, never retreating.  Up ahead a daredevil knight pounces upon the enemy flank, returning in triumph with his spoils.  And a bland and pious-appearing bishop, ensconced in a corner far removed from the strife, unexpectedly darts forth to shake the throne.

Truly a chess master said, many years ago,  "The pieces move themselves."

The club has led a "checkered" career since the lush pre-First World War days.  Founded in 1900, (The original club founding in 1877 is thought to have been interrupted by the yellow fever epidemic of 1878.–editor), it once thrived under the sponsorship of the old Business Men's Club.  For a number of years after the Memphis Chamber of Commerce took over the Business Men's Club, chess enthusiasts met regularly following the Chamber of Commerce luncheons. (Location: 81 Monroe Ave.–editor)

When the Chamber moved to its present location in the Peabody Hotel, Chess Club members had to strike out for themselves.  Boasting a membership of 125 at its peak, the group has been down to about 20 old regulars for the last several years.

But the survivors, who rarely give up a battle until their king is left standing alone, hope to gain new strength under the leadership of the club "king" and president, B. B. Jefferson.  Mr. Jefferson won the Western Chess Championship (aka U.S. Open) two times running.  From all reports he has yet to find his match here.

Visitors are welcome to the club any afternoon (in 1947) between 1:30 and 5, Mr. Jefferson said.  Because members now play checkers as much as chess, the club is making plans to invite a nationally known checkers master to Memphis within a few weeks, the president disclosed. 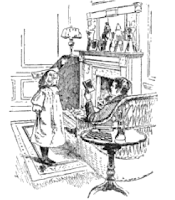 Since it is a pastime perhaps 2000 years old, chess has kept many of its feudal trimmings.  But it's really a democratic game.

Take the matter of the emancipation of women.  In medieval times the chess queen was a poor creature, barely able to move.  Now she is the most powerful battler of the lot.

Or the old notion about the "divine right of kings."  Like Friar Tuck, a plane bishop is sometimes privileged to knock a king prostrate.  The aristocratic idea of "opportunity for the few" also has "gone by the board."  In chess a poor foot-slogging pawn may become a queen, or almost anything, if he just goes far enough.


(The American Chess Magazine, June 1897)
Effie––"Please, Uncle Arthur, do come and play chess with me."
Uncle Arthur––"Oh Effie! Don't you remember? It's Sunday."
Effie––"Well, we can let the Bishop win!"

There are a number of older post regarding chess history; click "Older Posts" at the bottom right of the blog page, if you are interested in continued reading.
Posted by Chess Advocate at 12:01 AM