Zugzwanged in Public or The Annual Chess Banquet


My Corner
by Pion Potzer

I took my chess widow to the club's awards banquet.  At the party, I tried to introduce her to Carol Little.  Carol floated by en passant with a large glassy-eyed smile mumbling something about a 50's party that was scheduled for the same place.  "Worked out the chess puzzle on the cake?" my wife asked.  I told her that I never worried about end games because I never got that far during tournaments, and I  wasn't going to worry about it now.  Besides, I couldn't figure it out anyway. "How come you didn't win any awards?" she wondered. "Well. . . I was up for 'Most Overlooked Mate,' 'Most Fianchettoed Bishop,' 'Caught on the Back Rank Again Award,' but I asked the organizers to mail them to me. "Oh," she sighted, "you didn't want to be Zugzwanged in public."

Editor's note:  My brother and I did attend the first banquet, making us feel privileged to belong to  such a grand organization.  It was all brought about by the officers of the chess club to in order to celebrate our club's founding and to honor the member's accomplishments––serious or otherwise.

Thank goodness I never won an award at one of these functions; I was nominated once, and as you can guess, it fell in the fun category.  Below is presented a montage of documents and photographs illustrating the "good ole days" of chess club banquets. The picture below has me (up front in the plaid coat) with my little brother, and Kenny Thomas is to his right, and to the far left side is David Meyers. Clicking on any picture will carry you to a page with a larger version of the photograph. 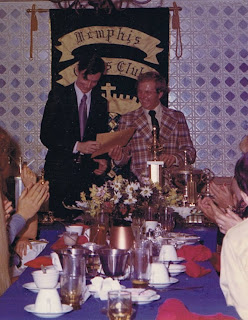 At this year's Memphis Chess Club Award's Banquet, it was gratifying to us that it should be John Hurt's night.  Not only did he receive first place in the City Championship, but there were other things in store for him as well.  For many years, John has been a guiding factor in the Memphis Chess Club as club President, and more recently, as a member of the Board of Directors and Editor of the Mid-South Chess Advocate.  For his service to the club and to the community, John was awarded the Memphis Chess Club Service Award.  But, this was not the end of honors; for many years he has been the organizer of junior chess activities in Memphis, mainly in the coordinating of the High School Chess League jointly sponsored by Memphis Chess Club, the Northeast Optimist Club, Memphis Public Library, and the Memphis Board of Education.  The Officers thought it was only fitting that the new High School Chess League Plaque be named, "The John F. Hurt Team Plaque."

The Officers and Members of Memphis Chess Club are truly grateful for the many years of service Mr. Hurt has given to chess, and we expect many more active years in the future.


The photographs below are from the 1976 Memphis Chess Club Awards Banquet: 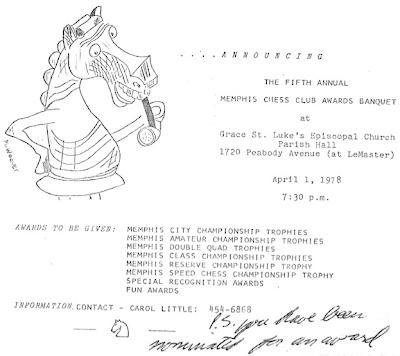 Editor:  One recollection from the banquet days of the late 1970's starts out with one of our members winning a tournament called the Ichthyoid Quad.  It seems the club president presented the champion a trophy with a fish decoration.  For some reason this was not satisfactory to the winner who tried unsuccessfully to  have the top component replaced with something representing chess.  Hence, a complaint was filed to the USCF, and I overheard that the argument was, "I don't want fish trophy; I want chess trophy!"  To this day I do not know if this ever was resolved nor the text of the USCF's reply.
Posted by Chess Advocate at 1:56 PM