Queen Me vs. King Me

Even having a hobby these days isn't a bed of roses.  A survey of two Mid-South groups meeting in Memphis yesterday, chess and checkers players turned up these items:

A chess official said that checkers is the most skillful of  all games – next to chess. 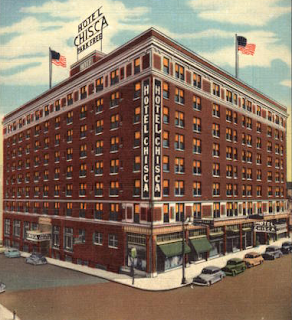 John Hurt, president of the Memphis Chess Club, when told that the annual Memphis Open Checker Tournament was being played at the Hotel Chisca, said some good things about checkers, but he added a few points for the record.

"You only use half of the board in checkers," said Mr. Hurt, "and all the players move alike.  But next to chess, checkers is the most skillful of all games."

Hugh Burton of Jackson, TN, the Mid-South's co-champion checker player, didn't exactly see it that way. Nor did Dr. H. L. Cravens, here from Brownwood, Texas, to play in the checker tournament.

"Some masters who have played both games said they prefer checkers," said Mr. Burton. "You can make a mistake in chess and recover.  But in checkers if you make a mistake and your opponent knows what he is doing–you are beaten."

"We know, of course, that checkers is the oldest type game," said Dr. Cravens.

"Actually checkers is played on a chess board," said Mr. Hurt.

"Chess is played on a checker board," said Mr. Burton.

Both the tournaments end Sunday.


Steve Balsai Regains Mid-South Title
The eighth annual Mid-South tourneys took place over the Thanksgiving weekend in Memphis, Tennessee.  Besides Tennessee, four other states (Georgia, Alabama, Arkansas, and Colorodo) were represented.  With only seventeen players, the event was quite poorly attended.  Peter Lahde of Nashville directed.

Steven Balsai of Hot Springs, Arkansas, again displayed good form to win the Open Division by winning five games and allowing only one draw.  Trailing by a point were Charles Bonner of Huntsville, Alabama and James Wright of Millington, Tennessee representing the local forces.  Bill Willowers of Russellville, Arkansas too the Amatuer Division and Ed Garner of Memphis won the Reserve.

The event received excellent coverage by the news media. 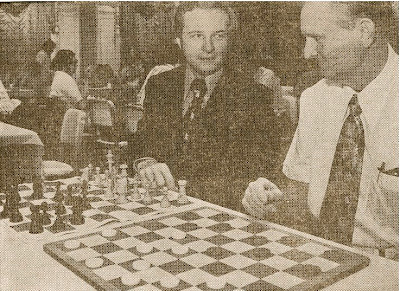 The Mid-South Open (chess) Tournament and the Memphis Open Checker Tournament are both in progress at the Sheraton-Peabody Hotel.  James C. Little, pictured on the left, president of the Memphis Chess Club, and J. R. Guthrie, checker player from Humboldt, TN, compared the two games as they competed in their respective tournaments today.  Both three-day competitions end tomorrow.

John Hurt, current Tennessee state chess champion, added another title Sunday as he won the 14th annual Mid-South Open over 31 others at the Sheraton-Peabody.

Although American checkers (also English droughts) and chess may be played on the same checkerboard, the two games are essentially different as to their objectives, materials utilized in play, and in their methods of play. More specifically these two games differ as:

Checkers: 1. The object of this game is to capture the opponent`s checkers.

Chess: 1. The object of this game is to checkmate the opponent`s King.

Checkers: 2. The game is played on the 32 dark squares.

Checkers: 3. Each player starts with 12 checkers.

Chess: 3. Each player starts with 16 chessmen.

Checkers: 4. At the opening, checkers occupy all the black squares on the rows immediately before the player.

Chess: 4. At the opening, chessmen occupy all squares, both black and white, on the two rows (ranks) immediately before the players.

Checkers: 6. All checkers move and jump forward only until they are crowned "Kings."

Chess: 6. The various chessmen have their own distinctive moves.

Checkers: 7. Checkers can be promoted to Kings only.

Chess: 7. Only pawns can be promoted. they may become Queens, Bishops, Knights, or Rooks depending upon the choice of the player.

Checkers: 8. Capture or "to jump" is compulsory.

Chess: 8. Captures are optional except when necessary to avoid checkmate.

Checkers: 9. Capture consist of leaping over the captured piece and removing the man that was jumped.

Chess: 9. Capture consists of removing the captured piece and taking his position.

Checkers: 10. One or more checkers may be captured at one time.

Chess: 10. Only one chessman may be captured at one time.

Marion Tinsley, long-time and undefeated world checker champion, said, "chess is like the ocean while checkers is like a deep well." 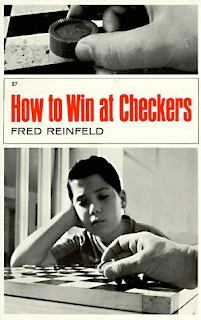 Editor:  The year was 1973, I purchased Fred Reinfield's book "How to Win at Checkers"at a local bookseller in order to learn how to win against a fellow classmate.  My dad was the champion checker player in our household, but he did not know how to give me any pointers.  It had only been a few months since I was taught the game of chess, and the books I had collected improved my game play in that area.  Checkers had its own type of notation, which I had to get used to.  Checkers used named variations for its opening moves, so I memorized a few of them.  As the school year slowly passed, I was able to win some games against my classmate.  Later on that same year, I noticed that my ability to see ahead in chess translated over to checkers as well.  Shockingly, it occurred to me in one match with my dad that I could win.  After all these years, age seventeen at the time, this was my turn to win at checkers. The blood left my face. I previously thought this would be a proud moment, conquering him at his own game and gloating afterward.  Instead, I was feeling the same emotion I had gotten in chess when noticing that I was about to drop a major piece.  The knowledge of my potential victory was overwhelmingly disappointing, so I let him win and he kept his crown. Within a few months, my dad went into a semicoma following an aneurism, and he died just a little over a year later.

It was once told to me that Curt Jones, who is now a Memphis area resident Master, was brought to tears the first time he defeated his dad, Joe Jones, in a tournament.  Below is a Jones vs. Jones battle but not the aforementioned one:         Music City Chess May 1978 Vol. 8 No. 2 pg. 11


OOPS!––Claire Luce, star of Memphis Arena Theater's production of "Personal Appearance," is in trouble.  Her opponent across the chess board is B. B. Jefferson, 1353 Vinton, retired real estate man.  Miss Luce learned chess while on tour in the Isles of Greece some years ago.  But the Greeks apparently didn't tell her some of the tricks Mr. Jefferson knows.  He has been the president of the (Memphis) Chess and Checkers Club at the Young Men's Christian Association for 40 years and has been (chess) champion of the South since 1912.  The match took place at the Resthaven Nursing Home where Mr. Jefferson is recovering from a broken hip.  The winnah!––Mr. Jefferson.  (Editor: The photograph directly above was in poor condition and will be replaced once a better copy is found.)


A History of Tennessee Chess
by Peter Lahde