The tournament pictured above was indeed history in the making, as the traditional post-Thanksgiving Mid-South Open chess tournament moved from Memphis to Tunica, Mississippi.   Twenty-seven players participated in what was called the 37th Mid-South Open tournament in MS, and they were from AR, NC, NY, MS, AL, TX, FL – the winner was Andy Reeder from Alabama. (This tourney was actually the 38th Mid-South Open as someone had gotten off count, which was not corrected until 2011.) 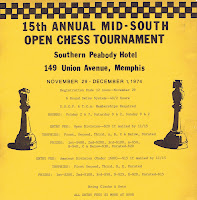 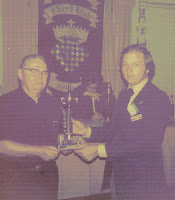 There were 64 participants in the 15th Annual 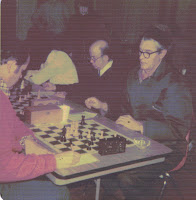 Mid-South Open (25 players in the Open & 39 players in the Amateur) from 10 states in the two- section tournament held at The Peabody Hotel in Memphis over Thanksgiving weekend.  It was a smoothly run tournament, quite enjoyable, and as always, The Peabody provided an excellent playing site with its convenient accommodations. 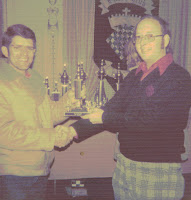 
From the Tennessee Chess News, January 1975: 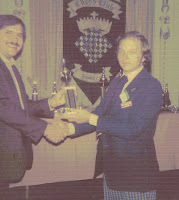 Albert Bowen of Nashville was the winner of the Mid-South Amateur with 5 1/2.  Second was Kent Meadows also of Nashville with a score of 5.  Four players tied for third in this order of tie-break: 3rd Mike Sulcer (Ark), 4th Jack Smith (Memphis), 5th Mark McLaughlin (Memphis), and 6th Jerry Wheeler (Nashville); all had 4 1/2 points.

Games of Knights and Kings
(from the Commercial Appeal November 29, 1969)

Checker and chess fans began matching skills yesterday as the Memphis Chess Club and Tennessee Chess Association (Mid-South Open) Tournament opened at the Downtowner, and the annual Memphis Open Checker Tournament got underway at the Chisca Plaza.  Former tournament winner John, Hurt, 55, and Kenneth Thomas, 14, the 1968 city high school champion, faced each other at the Downtowner.  Both tournaments continue through tomorrow.

From the Tennessee Chess News, January 1970:

The 12 player Amateur was won by Doug Ralston of Madison, a suburb of Nashville, with 5 points.  Three players tied with 4 points: Garner and Felt of Memphis and Cornwell of Madison, Tennessee.

There were thirty-one players in both events this year. Nashville actually edged the home team in attendance with 12 players to 11.  That was not too good for the Memphis delegation.  Also discouraging was the small number of players from Alabama (none from Huntsville) and Arkansas.  We were glad to see Louisiana and Mississippi represented this year.  Frank Garner did an excellent job in directing the event.

From the Tennessee Chess News, January 1969:

Alabamians had a field day at Memphis in the 9th Mid-South Open as they swept the field three places to get even with the Tennesseans winning their tournaments.  Winner was the pre-tournament favorite, Milan Momic of Muscle Shoals, scoring 5 points, yielding only two draws with Martin Appleberry and John Hurt.  Martin Appleberry of Huntsville was a clear second with 4 1/2 points.  Third place was taken by Charles Bonner, also of Huntsville with four points.  Fourth thru sixth went to Majood Hahas of Lake Hamilton, Arkansas, ahead of James Wright, Millington, Tennessee, and John Roh of Huntsville.  All had 3 1/2.  This was one of the most successful  Mid-Souths in recent years, thanks in part to the participation of members of the Junior Chess Club of Nashville.  In all there were eight players from Nashville.  Memphis, as host, had only eleven players.  As expected there were many surprises and upsets.  Perhaps the greatest was John Hurt of Memphis being upset by lower rated Nashvillians Tony Estos and Joe Jones.

The Amateur was also won by an Alabama player; Paul Hargett of Sheffield with five points.

Thirty-one men and boys are engaged in a mental duel to the finish this weekend at the Hotel Claridge.

This is the seventh annual Mid-South Open Chess Tournament, sponsored by the Memphis Chess Club. The players range in age from 16 to 84 and they come from Illinois, Alabama, Arkansas, Mississippi and other states.

Four boys are 16.  The 84 year-old player is "Uncle Bob" Scrivener, Nesbit, Mississippi, a tournament favorite. Scrivener is a retired, former personnel manager of Delta Airlines, and is recognized as dean of Mid-South chess buffs.

Among those from Memphis playing is Frank Garner, president of the Memphis Chess Club. "Chess players take the game seriously," Garner whispered. "It gets to be an obsession with us."

Chess players look down their noses at bridge players, who are also known for their intense dedication and concentration. "There's a difference between the two," said Garner. "Bridge players yield to destiny and we control it."

There were two rounds yesterday, two more today and finals will be tomorrow.

From the January 1967 Tennessee Chess News:

Steve Balsai of Hot Springs, Arkansas, was the winner of the seventh Mid-South Open tournament with a 5 1/2 score.  The event took place over the Thanksgiving weekend.  Second and third places were taken by Levine of New Orleans and Ken Williamson of Huntsville with 4 1/2 points.  Fourth and fifth places were taken by Hurt of Memphis and Belke of Little Rock with four points.

The tourney was well attended with thirty-three participants.  Only one player was from East Tennessee – Emanuel Tsitseklis from Knoxville and none from Middle Tennessee took part.

Posted by Chess Advocate at 5:40 PM