Iron Man Jim is a Fighter, But a Quiet One
by Philip Maclin (Press-Scimitar Staff Writer) 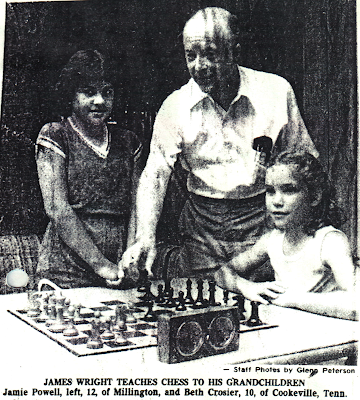 If you were told that you were going to battle "Iron Man Jim," you might picture a bare-knuckle boxer outside a saloon–but James A. Wright doesn't fit that image.  Wright, 60, is small in stature; friendly with a pleasant smile and a Southern gentleman farmer from Millington, TN who rarely raises his voice.  He earned the nickname of "Iron Jim" by being one of the best (players at the Memphis Chess Club) . . .  He was third in the city (chess championship) finals this year (1980).  He was Tennessee State champion twice – in 1964 and 1970. 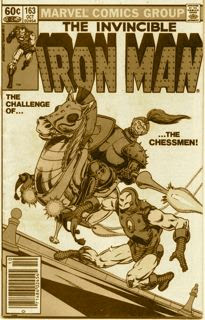 Wright is known for his well developed positions where strong combinations are always a possibility.  He is one of the most versatile opening players in the Memphis club, using both king and queen pawn openings as white and the French, Sicilian and Alekhine defenses as black. (Jim Wright was a farmer in the Millington, TN area going back to the days when a lot of farming was done by himself and hired hands.) "Now we farm mostly with machinery," he said.  Wright is semi-retired, renting out most of the 225 acres remaining.  Approximately 350 of the original 657 acres have been sold for real estate development during the past 31 years.  "I used to have farmland with cattle grazing both sides of the highway (US 51), but now that land is all developed commercial property. Things have changed much in farming.  This is our first year not to have any cotton.  It's all soybeans and cattle now." 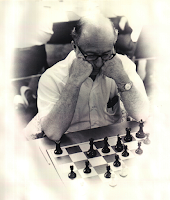 There is plenty of time for chess especially against two old rivals – John Hurt, a retired office machines salesman and also a former city chess champion and Ron Minor, executive director of the Millington Housing Authority. (Gary Pylant recently explained Mr. Wright's nickname. Pylant said, James Mitchell referred to Jim as "Iron Man" because Mr. Wright was always cool under fire and no matter the outcome of the game, he always said, "Thanks, I enjoyed the game.")

"JAMES ALFRED WRIGHT, 83, of Millington, TN, retired cotton and cattle farmer, died Tuesday at Baptist Memorial Hospital-Memphis. Services will be at 10 a.m. Friday at First Baptist Church in Millington, where he was a deacon and Sunday school teacher, with burial in Woodhaven Memory Garden. Munford Funeral Home Millington Chapel has charge.

He was a graduate of Bartlett High School and the University of Tennessee at Martin, director of Millington Housing Authority, a World War II veteran and winner of the Memphis Mid-South Open, Tennessee Open and Alabama Open chess tournaments. Mr. Wright, the husband of Mary Virginia Wright for 60 years, also leaves four daughters, Mary Lynn White of Covington, Catherine Elaine Taylor of Como, Miss., Rebecca Margaret Crosier of Cookeville, Tenn., and Marcia James Thorp of Memphis; a sister, Ruth Conn of Memphis; a brother, Joseph E. Wright of Nashville, 10 grandchildren and 13 great-grandchildren. The family requests that any memorials be sent to First Baptist Church building fund."

The game below was played in the West Tennessee State Championship held in Memphis, TN at the Howard Johnson's Motor Inn, 3280 Elvis Presley Blvd, June 11-12, 1977.  The time control was 50 moves in two hours. Mahlon A. Smith came in first in the tournament with 4 1/2 points out of five.  The half point was with James A. Wright.