Somewhere in Memphis there may be a 12 year-old who will challenge American Bobby Fischer for the world chess championship in 1984, and the Memphis Chess Club wants him to have that opportunity.

"The critical period in the development of a chess master is between the ages 13 and 19," said a statistical survey in the U.S. Chess Federation magazine last July (1973.)  "For a player to develop the strength of a Grandmaster he must be playing at master level (2200 rating) by the age of 18 – at most 19," the study said.

"You have to get the young people started early, and the Memphis Chess Club intends to reach all the youngsters possible in Memphis," said James Little, club vice president and chief director of a new massive teaching program for all ages.  "In the past three months we have started several beginning chess classes to introduce chess to all ages," Little said.

The chess classes sponsored by the Memphis Chess club Inc. include:
"Of course we don't expect everyone to become a chess master," said Little.  "It's a sad mistake that in America we put so much emphasis on winning.  You can have a lot of fun with chess and not be the winner all the time.  The club hopes to introduce average players to chess as well as provide youngsters with the opportunity of going all the way to a world title some day."   The Memphis Chess Club reached the "100 active members" mark last Friday night, Little said. 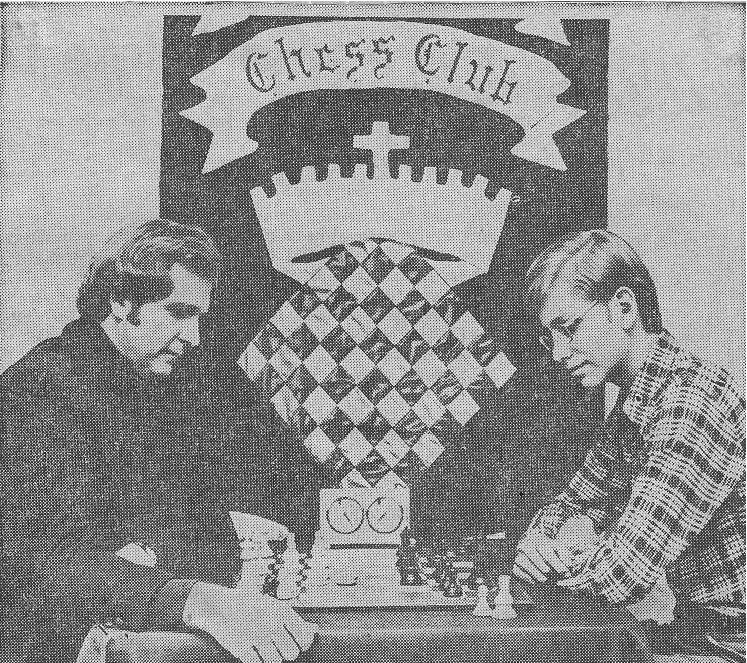 –Press-Scimitar Staff Photo by Glenn Peterson
CHESS OCCUPIES MOST OF THEIR TIME
James C. Little, vice president of Memphis Chess Club Inc.,
plays a game with Robert Holyfield, one of the city's most
promising young players.  The chess club has started a drive
to introduce more Memphians to the game.

One of the bright young hopefuls in Memphis is Robert Holyfield,  a 15-year-old sophomore at Harding Academy who has been playing chess since he was 4.  Robert just passed the 1600 mark in his U.S.C.F tournament rating.  If he can pass 1700 within the next six months before he's 16, he's sure  to be in the top 15 in the nation for the below 16 age category.  The national rating average for tournament players of all ages is 1362.

"I really don't know how many hours a week I spend on chess, but it's a lot," said young Holyfield.  "I'll be playing a lot of tournament chess in the next few months to improve that rating."

In the city qualifying tournament this year (1974) Holyfield placed ahead of Eddie Middleton, top ranked in the club, and John Hurt, who has won both the city and state titles.  However, in the round-robin tournament for the city title Middleton won.  But Holyfield has shown he is already a threat in every tournament here.

From the 1970's until the 1990's, the Memphis Chess Club would mail out a club events calendar which gave the area's players the opportunity to plan ahead for Friday night and weekend tournaments.  The example below is from the year 1980.  As you can see below, the Memphis City Championship was played with one round taking place each Friday, allowing those who qualified the chance to book-up on their opponent during the week.

For the club's current weekend and Friday calendars please click these links:

**
To Qualify for competition in the Fourth annual Memphis City Speed Championship you must either be the tournament's defending champion or else win one of the nine 1980 Speed Chess Tournaments.  Once qualified, you must compete in subsequent tournament; a tournament winner, however, shall be the top scorer who has not yet qualified to compete.  Site for the 1980 meet shall be decided at a later date.

For more old club calendars, use these links: