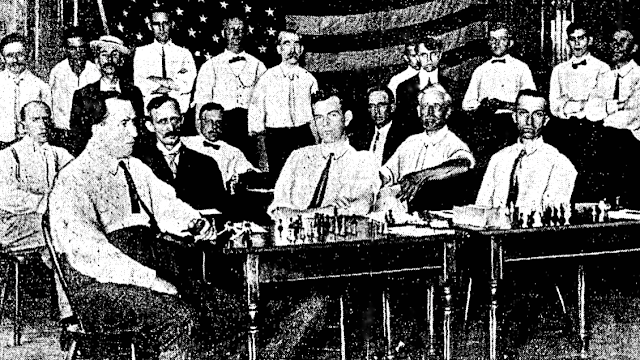 It was 100 hundred years ago today – on August 24, 1913 – that Bradford B. (“B.B.”) Jefferson, a Memphis businessman, stepped out of the shadows to assume his rightful place in the national chess limelight. With a score of 13.5 – 3.5, Jefferson claimed the championship of the Western Chess Association and a prominent place in chess history. The tournament, the forerunner of the U.S. Open, was held Aug. 18 – 24 at the Kenwood Chess Club in Chicago.
At the time, the Western Chess Association encompassed basically the entire nation south and west of New York, including part of Canada. The winner was immediately acknowledged as one of the premier players in the nation.
For years, B.B. had been well known in Memphis and throughout the South as a great player, dominating all visitors to the Memphis Chess Club. He also had an enviable record against top grandmasters in simultaneous exhibitions, twice defeating Harry Nelson Pillsbury, beating and drawing Geza Maroczy, and even drawing with World Champion Emanuel Lasker. In 1907, he acted as Referee for the three games of the World Chess Championship match that were played in Memphis between Emanuel Lasker and Frank Marshall.
Until the 1913 Western Championship, however, B.B. had apparently never ventured outside of Memphis to test himself against the best. He defended his championship the next year, when the Western Chess Association Tournament came to Memphis. But that is another story.

Two games reported here have been unearthed from the files of the Memphis Commercial Appeal and seem to be unknown. The games are:

Games with obviously corrupt notation have been corrected and verified using Vektor3 for Mac.

For a more detailed account of Jefferson’s victory in the 1913 Western Championship, watch for the September 2013 issue of the Chess Advocate.


-- Thanks to Memphis Chess Club member Frank Wranovix for his assistance with this post.

Put Memphis on the Chess Map

By the brilliant showing made by Bradford Jefferson and Robert Scrivener, two of the members of the team representing the Memphis Chess Club at the fourteenth annual tourney of the Western Chess Association, held the past week in Chicago, Memphis has been placed in the limelight of the chess world.

Jefferson was returned the 1913 champion while Scrivener, the newly elected president of the association, finished fifth.  Through the medium of their good showing it was decided that the 1914 tourney should be held in this city.

The new Western champion has for some time been the recognized champion of the South, and upon his entry into the tourney at Chicago it was predicted that he would finish high in the play.

Scrivener seemed to get away with a bad start, but the brace during the latter part of the week placed him above many of the Eastern experts at the finish.

Southerner in the Saddle

As reported in a special dispatch from Chicago to the Eagle Monday, the championship tournament of the Western Chess Association was captured by B. B. Jefferson of Memphis, Tenn, long known as one of the best players in the South.  The Western Champion is a brother of Miss Rosa B. Jefferson, chess editor of the Memphis Commercial-Appeal, herself a very talented player, writer, and musician.  In December next Miss Jefferson will have completed ten years as conductor of the chess department referred to.  The following smartly played game was the result of Jefferson's encounter with G. Gessner of Chicago.

The recent championship tourney of the Western Chess Association, held in Chicago at the Kenwood Club, and won by B. B. Jefferson, chess king of the South, attracted widespread interest.

The tourney started in Chicago on Monday morning, August 18, at 11 o'clock.  There were 18 crack players entered from different states.  Tennessee was represented by B. B. Jefferson and R. S. Scrivener of Memphis, Missouri by J. Daniels of Kansas City, Minnesota by E. P. Elliott of Minneapolis, Kentucky by J. T. Beckner of Winchester, Ohio by S. H. Shapiro of Cleveland, Nebraska by Cooper Ellis of Bloomfield, Iowa by A. E. Crew of Marion and Marvin Palmer of Tama; Canada sent J. S. Morrison of Toronto, the Canadian Champion; Illinois was represented by six of the best players in Chicago, C. W. Phillips, champion of the Chicago Chess and Checker Club; John Winter, ex-champion of the club; H. Hahlbohm, champion of the Northwest Chess Club; E. Michelsen, ex-champion of the association; George Gessner, ex-champion of the Kennwood Club, and J. Friedlander.


The victory was a big one, not for Memphis, but for Tennessee, and Jefferson deserves unstinted praise for winning chief honors against such strong opposition.  Chicago has held the "championship cup" always and this year had six experts entered to make a big fight to hold it.  That Memphis should have captured it the first time is a double honor for the local expert.

The next tourney will be held in Memphis during the summer of 1914, and if Jefferson should win the cup then it will become the property of the Memphis Chess Club.

Robert S. Scrivener, the local expert who also made a brilliant showing, was elected president of the association for the ensuing year, and will have charge of the arrangements for the next meeting.

Mr. Scrivener has already begun to plan to make the Memphis tourney a memorable one and to have it go on record as the best one in the history of the North-Western Association.  In all of his plans he will have the hearty co-operation of the players of Memphis.  In fact, it is expected that chess players throughout the south will come forward and help make the meeting an overwhelming success.

Mr. Scrivener won fifth place in the tourney, and by his brilliant play also helped to sustain the reputation of the local club.  He made a splendid showing the first part of the tourney, and for several days took the lead.

Special praise is due him for the fact that he won games from the very best players in the tourney.

On the sixth day of the match, after the completion of the fourteenth round, Scrivener also made a good advance and took third place.  The Chicago papers spoke of the advance of the "Memphis Expert" as the most notable event of the thirteenth and fourteenth rounds.

It was the strain of Sunday's play that brought Scrivener to fifth place.

Jefferson, from a poor showing the first two days, finally worked his way to first place, which he held to the finish.  He did not seem to be in good form until the third day, when he gave evidence of his unusual strength.

The conclusion of the seventh, the final round, found Jefferson still in the lead with E. P. Elliott and J. S. Morrison tied for second place.

Jefferson was widely praised for his strength.  The papers gave him full credit for wresting the title by "strong, brilliant play."

Says the Chicago Tribune:  "B. B. Jefferson of Memphis won the championship in the tournament of the Western Chess Association, which closed at the Kenwood Club yesterday.  Jefferson, who is the strongest player in the south, was expected to take high rank even after making a poor start.  His victory was a popular one and his style of play was much admired.  He and his associates from Memphis added much to the success of the meeting.  The final scores were as follows:


More games in each diagram below:  Select another game by clicking the bar above the black pieces.


Multiple game selection:  Choose each game by clicking the bar above the black pieces.