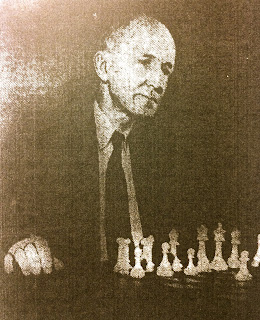 B. B. Jefferson Sr., Memphis real estate dealer and Southern chess champion for 30 years,
has a last game of chess at the Memphis Chess Club, Falls Building,
before leaving tonight for Chicago, where he will compete for the national championship.

Thirty-four years ago the Western Chess Association offered a sliver loving cup to the chess player winning the national championship, (Western Championship aka U. S. Open), two years in succession.

In 1913, B. B. Jefferson, of 1353 Vinton, Memphis real estate dealer, won the national at Chicago.  In 1914 he repeated his victory in Memphis and won the loving cup that crack chess players had competed for over a period of 14 years.

Tonight–just 20 years after his victory that broke the record of Western Association Play–he leaves for Chicago to participate in the association's national tournament, which begins Saturday and last 10 days.  He will represent not only Memphis, but the entire South, having held the Southern championship 30 years.

His enthusiasm over the tournament is somewhat dimmed by the fact that his friendly opponent, R. S. Scrivener, of Pacific Seaboard Airlines, the Memphis champion, has canceled his plans to participate in the tournament on account of business.

Until this year, the tournament has always been an invitational affair, with 12 invitations as the limit, and both Mr. Jefferson and Mr. Scrivener have been especially invited every year since 1913.

Three generations of Mr. Jefferson's family have played chess.  Mr. Jefferson was taught the game by a girl cousin in Mississippi when he was only six.  Except for the little whist and a little  duplicate bridge, which he describes as the most scientific games in cards, he has concentrated on chess ever since.

One of the biggest experiences in Mr. Jefferson's career as a chess player was refereeing the world's championship match between Dr. Emanuel Lasker, of London, and Frank J. Marshall, of New York, which was played partly here and partly in New York, about 1907.

Mr. Jefferson plays chess nearly every day and he plays the Memphis champ regularly once a month or oftener.  He also plays his sister, Miss Rosa Jefferson, probably the best woman player in the South, frequently.

Mr. Jefferson is one of the most enthusiastic of the 30 members of the Memphis Chess Club, which has clubrooms in the Falls Building.  David Cummins is the president and W. H. Coon, secretary.

All state champions have been invited to compete in this year's tournament, and 32 players will actually be there.  They have come from all over the United States and Canada as well.  They will be allowed an hour for the first 20 moves, two hours for the next 20 moves.  Capital prize is $500.

The chessmen and the boards are furnished the players by the tournament committee.

"One set is as good as another," Mr. Jefferson observes, adding, "And I'm not carrying along anything for luck."

"I like chess because it is a scientific game–the most scientific game that is played.  Playing chess is very much like engaging in battle in the army.  It is the same to the mind as athletics to the body."

Mr. Jefferson named some of the ardent chess players of past and present history, among them Napoleon Bonaparte and Joseph B. Stalin, secretary-general of the Soviet Union Communist Party.

"Chess is taught in some of the schools of Germany," Mr. Jefferson continued.  "There are over 700,000 players in Russia.  There are probably 1,000 right here in Memphis."

While chess has never been as popular with women as with men, Mr. Jefferson is glad there will be a woman's tournament in Chicago at the same time as the men's.  He also is delighted that State Teachers College and Southwestern students have formed chess clubs.

Mr. Jefferson lives at 1353 Vinton.  He and Mr. Scrivener have been playing together, "off and on" since 1904.  Mr. Scrivener's father and grandfather played, and now his sons play too.  He won the city championship in 1905.

"I've always liked problems in mathamatics–and you can't run out of problems on a chess board," Mr. Scrivener said.  "When I was at Christian Brothers College I used to worry Brother Leopold Francis to give me additional problems.  He did–on the chess board.  And I've been working them out ever since." 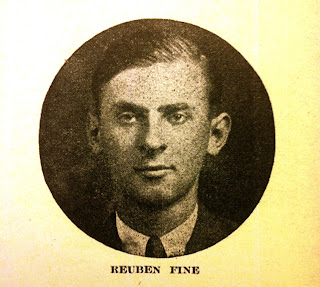 With the steadiness that marks the seasoned veteran of master play, young Reuben Fine of New York has rapidly climbed the heights, until today,  at the age of nineteen, he is recognized as one of America's outstanding players.

First achieving prominence by winning the championship of the Marshall Chess Club, several years ago, he thereafter continued in his successful stride by winning the Western Championship, (aka U. S. Open), in 1932 and 1933, and by making a splendid record for himself as a member of the American team which retained the Hamilton-Russell trophy in international competition at Folkestone, England.  In match play he also performed well, defeating his fellow teammate, Arthur W. Dake of Portland, Oregon, and Herman Steiner, member of the 1931 victorious team.

The quality of his play entirely belies his years.  Never impetuous, always imaginative, he is capable of winning by virtue of a thorough knowledge of positional principles, and an ability to achieve and increase small and subtle advantages.

This year he has again won the championship of the Marshall Chess Club and is at present engaged in a twelve-game match with I. A. Horowitz, member of the 1931 American team, which won premier honors in the international team tournament held in Prague.  The first two games of the match were played in Philadelphia at the rooms of the Mercantile Library and the Franklin Chess Club respectively and resulted in a double win for Fine–a splendid start.  The third game was contested at the Manhattan Chess Club in New York City and ended in a draw.  Additional games are scheduled to be played at the Marshall Chess Club, the Stuyvesant Chess Club, and the Queens Chess Club.

The scores of the second and third games of this match are included in this issue, and, in a measure, illustrate Fine's resourcefulness and his style of play.

The web site Chessgames.com provided the statistics included in the following article.

The Western Championship took place July 21 thru August 1, 1934.  There were four qualifying sections, each with eight players; Reuben Fine and Bradford Jefferson were placed in the third section along with Jose Munoz, Vladimir Grigorieff, George Barnes, Sol Friedman, Edmund Nash, and Harry Lew.  The qualifying contest was a Round Robin. Reuben Fine finished with six wins; his only loss was to Jose Muoz.  Bradford Jefferson completed the qualifier with a score of four wins,  one draw and two losses.  Mr. Jefferson lost to Reuben Fine, drew Jose Muoz, and lost to Vladimir Grigorieff.

For more information on the 1934 Western Open Championship click on this chessgames.com link:

Leonard Dickerson has provided the annotation inside the following game from the Western Open qualifier between Reuben Fine and Bradford Jefferson, played on July 23, 1934.

The 35th Annual Tournament of the Western Chess Association is now a thing of the past.  But the results will not be forgotten so soon!  Fine and Reshevsky lived up to expectations and divided the first and second prizes between them.  But Kashdan's poor showing was a stunning surprise.  Perhaps he will stage a comeback at Syracuse–we wish him success.

The tournament was one of the most successful ever run.  A good deal of the credit must go to Malcolm Sims of Toronto, Canada who acted as Tournament Director and Referee–all his decisions being final.  At the conclusion of the Tournament Samuel W. Addleman and Harry E. Heick entertained all the players and officials with a banquet at the Covenant Club, Chicago.  The toastmaster was Chas. H. Leech, President of the Illinois State Chess Association, and the prizes were distributed by Lewis J. Isaacs at the conclusion of the basquet.

The Western Chess Association announced the election of new officers as follows: