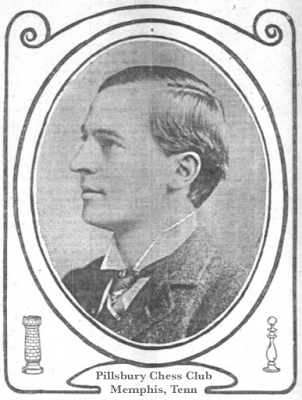 Tennessee: The Caissan Potpourri announces the formation of the Pillsbury Chess Club in Memphis at the apartment of Hunter Weaks, 150 North Cooper St.  The new club's president, Max F. Mueller, is hopeful of putting an end to the doldrums of Memphis Chess and invites all the city's chess lovers to join without regard to playing strength.  The first annual club championship is scheduled to begin in March. (The Cassian Potpourri was the official newsletter of the Pillsbury Chess Club, with its first edition in 1955.  Another mention of this newsletter was in the Tennessee Chess News, September 1963 featuring a reprint of a drawn simultaneous game between Samuel Reshevsky and Hunter Weaks on page 4.)

Tennessee: At the Pillsbury Chess Club in Memphis, the winner of the first club tournament was R. S. Scrivener with a score of 9 1/2 - 1 1/2.  He was awarded custody of a handsome gold-plated championship trophy.  Max F. Mueller, 9 - 2, was a good second, and Hunter Weaks, 8 1/2 - 2 1/2, finished third.  A prize for the best-played game went to Albert D. Laehder.

Members of various chess clubs in Tennessee gave reports on activities. Hunter Weaks said the Pillsbury Chess Club in Memphis was only occasionally active, particularly in the Summer time.  James Wright reported for the Memphis Chess Club saying they have about 30 members, they hold the city championship annually as well as the Mid-South (Open) tourney.

Hunter (Weaks) respected quality in all things and disliked mediocrity; so it was in his attitudes about chess and the teaching of chess. He believed that young players, beginning players of any age, should have a chess environment which would provide the maximum opportunity for the full development of their potentials.  During the early 60's, he was frankly dismayed by the seeming inability of the Memphis area to produce more strong players, and he felt that much of the blame lay with the Memphis Chess Club.  In his judgment, certain members of the club were more concerned with establishing themselves as club–masters, in the literal sense, than they where with the game of chess–and were still less interested in seeing young players develop to challenge their positions.  To be precise, Hunter did not feel that anyone was consciously inhibiting the growth of chess in the club; he simply felt that interrelated personality clashes were having an adverse effect that resulted in an unpleasant and unhealthy atmosphere for chess.  After much consideration spread over many months, Hunter decided to retire from the Memphis Chess Club; he did not re-enter the club for several years, until he had cause to think the situation had improved.

During those years of absence, Hunter of course continued his study of the game and played at the unofficial club at his home.  It was at this time that the old Pillsbury Club was reborn.  There had been some speculation among players in the Memphis Chess Club as to just what and who the "Pillsbury Rebels" were.  They were simply a few players who enjoyed chess in a reasonably congenial environment.  They irritated a few Memphis players by going to the state championships in Nashville in 1966 and 1967 and winning the team competition both times; they had the nerve, it seems, to engrave the victor's plaque "Pillsbury Chess Club"–which seemed appropriate since the Memphis Chess Club did not in fact win the competitions.  Aside from its Nashville excursions, the Pillsbury Club activities consisted of matches among its members, joint studies of openings (which included the thorough dissection of members' pet lines so that all might learn a little more), doing studies and exercise in the middle game and endgame, and attention to any specific problem a member might be having with the object of helping him overcome his difficulty–though it might cost another member a point at times.  The purposes of the Pillsbury Club were to improve the play of its members, to provide a pleasant setting for companionship as well as competition, and to make certain, when all its members could make it to Nashville, that the Tennessee team plaque would be properly engraved.  Hunter was, of course, the activity director for the Pillsbury Club and, as such, demonstrated that chess clubs could indeed be fruitful endeavors.  The Pillsbury Club, incidentally, was not a closed society; the chess players in Memphis at the time were well familiar with Hunter's home.

When Hunter rejoined the Memphis Chess Club in late 1971, no one could have known that he was to die of cancer in a year and a half.

I am writing to announce the formation of a new USCF affiliate in Memphis:  The Pillsbury Chess Club.  Actually the club began under the leadership of the late Hunter Weaks and has won the Team Trophy at the Tennessee Open twice in the middle 1960's but has been inactive for a few years.

Eddie Middleton, a close friend of Mr. Weaks, and member of the first organization, will serve as Vice-President.  Gary Pylant, (President of the Southern Chess Association), will serve as President.  Charles "Rick" Herbers is Treasurer, and I am Secretary.

Included are two games from the first two rounds of the renewed Pillsbury Chess Club Championship.


Here are the two games that Jack submitted: Dedicated to the memory of Hunter Weaks, Harry N. Pillsbury, the first Pillsbury Club, and of course, Caissa.


The Pillsbury Chess Club welcomes non-local competition: please write us if you would consider staying in one of our member's homes for a weekend in order to play in small round-robins, short matches, or small Swiss systems - preferably on a reciprocal basis.  Write to: Jack Smith, Secretary, 2768 Metrie, Memphis, TN 38114

The Pillsbury Incentive
by Jack Smith

The experimental graduated EF was not poplar and will be dropped.  However, the most improved format was well greeted by most entries polled.  We figured the Performance Rating and subtracted the Official Rating to obtain our winners; as Unrated, Provisional and 1200 and under are already rated according to the Performance formula they were eligible.  There were suggestion that perhaps simply figuring who had gained the most points according to the Official Rating Formula might be better.  Suggestions or comments are welcomed.

Robert Sentef of Oxford, MS (2214), fell to Looper and Middleton.  His official statement was: "I shall return, and when I do. . . . ."  Robert Ilderton (2148), is a newly arrived Memphis and TCA member who we welcome to the Mid-South.  Look out come the Candidates Tournament in June!

The tournament organizers, TD, and Pillsbury Chess Club wish to thank the 21 stalwarts, who braved the experimental format, for their cooperation and support. 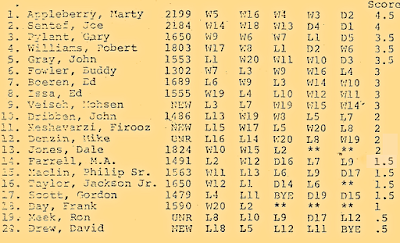 Games from the Pillsbury Chess Club Championship of  1979:

Marty Appleberry, Memphis' lone chess master, won the Pillsbury Incentive III which was held at the McFarland Community Center February 23rd.  Marty finished the tournament with two wins and a draw–half a point ahead of the eight players who tied for second place.  The Incentive III, which was sponsored by the Pillsbury Chess Club of Memphis, proved to be one of he strongest open tournaments that Memphis has seen in recent years.  The average rating of the players was 1806!

In 1980 the annual Memphis vs Nashville match wasn't played.  To uphold the honor of West Tennessee the Pillsbury Chess Club challenged Nashville to a six game, all vs all, postal match.


Games from this event:

Below is the only completed game found published.  The tournament lasted two years through the postal mail service.

Among the things at stake at the 1984 Tennessee Open was the "Uncle Bob" Scrivener Memorial Team Plaque.  There were 10 slots on the plaque:  Pillsbury Chess Club had four; Nashville had two-and-a-half;  Memphis had one;  and Knoxville had one-and-a-half.  If any other team but Nashville won this year, the Plaque would be retired to the Pillsbury Chess Club next year.

This year Nashville had only four representatives – but what players they were:  McCarthy, Burnett, Moore, and Meadows!  Memphis had the maximum seven at Round 1 but were down to five by Round six.  Pillsbury fielded a team, and Memphis had a second team, but Knoxville had only two players.  It was clearly to be a Nashville versus Memphis Race.

This projection was borne out during the rounds.  For most of the tournament it was dead even, but finally Memphis won by a half point.  Thus, the team plaque was retired to the Pillsbury Chess Club.  Through the years (1976, 1978, and 1983 previously) the team included Kenny Thomas, Robert Felt, Mahlon (Scott) Smith, Jack Smith, Gary Pylant, Charles (Rick) Herbers, Sid Pickard, Marty Appleberry, Leroy Boyd and others.  The Pillsbury "boys" also have defeated Nashville's Music City Chess Club in a postal match 4 to 2 in all-vs-all two year contest.

For several regular team members this may have been the last Tennessee Open for awhile, as Thomas, Scott, Smith, and Herbers all have moving plans.  After nine years, the group's goal has finally been achieved.  What the original Pillsbury Club could not do in the late 60's and early 70's, the second incarnation has done!  BRAVO!

A new team's first place will be at stake next year.  Now, who has the stamina to retire the next one?  Nashville? Memphis?  Knoxville? Cumberland County? Auburndale Alumni?  A new Pillsbury?  We'll know in a few years!  Congratulations to Memphis for their 1984 win, and to the Pillsbury for retiring the plaque.

[Just as the first Pillsbury Chess Club passed away with its founder in the 70s, and so it did with its second founder, Jack Smith.  Many of Pillsbury's living members are scattered across the country, but there are few that remain in the Mid-South area –– most are no longer active in a chess club.  Blog Editor: D. Weaver] 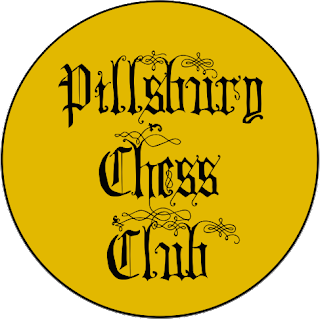