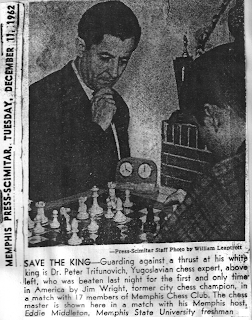 As may easily be supposed, chess exhibitions are very popular in Yugoslavia, and there are but a few cities there at which I have not played in them.  It is the usual custom on such occasions for many chess enthusiasts to cluster about me with incessant questions about the countries which I have seen during my chess tours.  And they never fail to ask whether I have been in the United States of America — or, as we say it "USA," that is, in one word.  On my negative answer, a sigh of disappointment always follows.  "Oh! we thought you'd been there also." 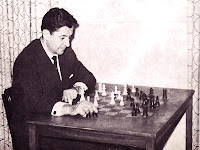 Now I have traveled literally all over Europe.  I have been to South America all of four times.  And I have even seen parts of Africa and the Middle East.  Yet all these tours quite apparently did not rank in the minds of my inquisitive compatriots as equal to one single trip to America.  So this point eventually became very annoying.  I began to feel myself that I was in truth missing something.  .  .
There was no excuse, I believed, for me not to do so.  It was my duty to rid myself of this deficiency and to add to my chess title that of another sort, that of a modern pilgrim.

Although a great part of my time in the United States has been spent over the chess board — as regular chessplayers may well imagine  I have seen enough to form a firm impression of the country.  And I shall return to Yougoslavia with a very much improved picture of America over that which I had before reaching these shores.

My first impression on my trip was a strong and unexpected one, formed even before my ship departed.  I had boarded the Queen Mary, and immediately it was as if someone had severed my ties with Europe with an invisible knife.  English became an indispensable language, and my dealing with the staff of the ship, and indeed with everyone else, proved that my knowledge of Italian, German and Spanish was of little use.

It was of some help that I procured a book on English language, though of course I could learn but little in the few days on board ship — and I do hope the reader will forgive such inadequacies as may appear in this article.

My tour in America was arranged by Dr. Edward Lasker, who was to me what a father is to a lost son.  My first exhibition was at the Marshall Chess Club November 15, 1962.

At the Manhattan Chess Club, I played eight simultaneous games with clock.  Afterwards, I was told that my score, five wins three draws, was considered excellent, for I had some masters playing against me.  .  .

I met my destiny, however in Memphis, Tennessee, where I least expected it.  I had only seventeen opponents at the exhibition, but lost a game, scoring thirteen wins, three draws and one loss, my first and only defeat during my whole American tour.  It is appropriate, I think to mention the name of my conqueror, Mr. James Wright of Millington, Tennessee. He surprised me by a combination which left me the Exchange down.

In Memphis, too, I met Mr. Hunter Weaks whose home looks to me like a real chess arsenal.  In one room alone, I counted eighteen chess sets, all ready for war.  The walls in another room were painted with the most famous positions from the games of well known Grandmasters.  It was easy to see that Mr. Weaks had the true ideal of American efficiency; for, even in the kitchen, he seemed eager to follow his favorite game; two chess boards were located on the oven so he doesn't lose any time even when cooking. 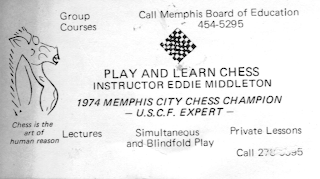 I was also the guest for one night of Mr. Horace Middleton.  His son Edward, (in later years the 1973, 1974, & 1976 Memphis City Champion), prefers playing chess at Mr. Weak's home to going to school.  But the principal point of my stay with Mr. Middleton was that he told me that, during the last war, he used to instruct the Yugoslav pilots, who then were sent for air attacks over Yugoslav territory.  I thanked him for the information but, at the same time, begged him not to do so in the future, because on many occasions I had the pleasure of having bombers over my head.

On December 28, I played my last exhibition but one in the United States, at La Salle College in Philadelphia.  .  .  I now take this opportunity to say good bye and good luck to all my American chess friends, before I leave for Canada on my way to Europe.

Dr. Lasker saw me off with this remark: "My dear doctor, in a few weeks you have seen much more of America than most of the people who were born here."  I think he was right.

On Monday, Dec. 10, (1962) International Grandmaster Petar Trifunovich gave a simul exhibition on invitation by the Memphis Chess Club.  He played 17 boards, winning 13, drawing 3, and losing one.  The winner for Memphis was James Wright and draws were obtained by Weaks, Gilley, and Ritenour.  The loss to Wright by the grandmaster was only Trifunovich's first since touring the U.S.

It may be noted that Oak Ridge and then Nashville were called by Dr. Lasker from New York first to finance the trip for Trifunovich and play there, but each city had to turn it down for lack of funds.

Three games are associated with the chess board directly below.
Notice:  To play through each game, click the "select bar" just above the black chess pieces.
Posted by Chess Advocate at 9:29 PM