The Memphis Chess Club has been a beacon for chess enthusiasts throughout its history.  It attracts players to participate from all over the Mid-South for weekend tournaments but also for the regular club meetings.  Each week players from DeSoto county travel to reach whatever location the club might have.  In 1973, after only a few months of having learned the game, I traveled from Southaven, MS to the Whitehaven public library and asked an assistant if she knew of a chess club in Memphis.  After looking through a card file of various information she came up with the name of John Hurt and a phone number.  My parents took me and a friend to St. Mary's Episcopal Church library that Friday night.  We met Mr. Hurt, and he tested me immediately with a game.  I was thrilled to see so many people involved in chess at one location.  There was this smell of cherry pipe tobacco in the air as the older fellows puffed away while sitting across from their opponent.  In October of that year, my friend Stephen D. Spencer and I, along with a teacher Steve Blackwood, formed the Southaven Chess Club at the newly-built Southaven High School.  A journalism project permitted me to be able to write and publish this account in a local newspaper:

"Since the world championship match of chess was won by Bobby Fischer for the United States, chess has spread throughout the country.

Just recently a few Southaven High School students and teachers formed Southaven's first chess club.   The club has had 2 meetings but enrollment has climbed to 31 members.  The club elected officials on their first meeting.  These are Stephen Spencer, president, Dwight Weaver, vice-president, and Mr. Steve Blackwood, director and organizer.
(Click "Read more" below.)

The club meets every Monday at 3:45.  Anyone wishing to come, whether a student or not, is welcome." -D. Weaver

Steve Spencer, although a Mississippian, was allowed to participate in the Memphis City School High School Chess Championship and is listed as winning the title in 1976. (At that time we had no scholastic chess organizations in N. MS.)

In 1986 Mississippi chess players Steven Shifflett and Mike Fore and a few others formed the Horn Lake Chess Club.  Wanting to attract more members throughout the area, they changed the name of their club in 1988 to the North Mississippi Chess Club.  Many of the NMCC members joined the Memphis Chess Club and even sent their tournament directors to assist in the 1988 National Jr. High Championship in Memphis.  Memphis Chess Club players also crossed the state line and participated in Mississippi tournaments as well.  Leroy Brown and Richard Herbers were frequent players at the NMCC.


Hernando formed a chess club under the direction of Michael R. Stewart, who is currently a master rated 2267.  He started playing at the Memphis Chess Club around the early 1980s.

"The Hernando Chess Club recently sponsored its first two tournaments:  the Lee Gooch Open and the Dr. Kidd Open.  Ten players participated in each of the four-round events.  Mike Stewart won all of his games to capture first place in the Lee Gouch Open.  Dr. Harvey Kidd and Mark Wilkinson each won three games to tie for second place.  There was a four-way tie for first place in the Dr. Kidd Open; Mark Wilkinson, Dr. John Rogers, Jack Rogers, and Dr. Harvey Kidd all scoring three points for first place honors.

The Hernando Chess Club meets every Tuesday night at the Hernando Public Library.  The meetings start at 7:00 pm and everyone is welcome."

It is not known if any of the above Mississippi clubs exist anymore. As for  DeSoto County chess activity, we go back to a former member of the North Mississippi Chess Club, Greg Turner, who went on to form his own club which is no longer in existence.  Greg has held the Mississippi State Championship title many times. A few quotes from his flier:

The Knights of DeSoto Chess Club  (This Club no longer exist)

"You're invited to come and play!  The Knights of DeSoto Chess Club meets every Thursday from 4:00 --6:30 pm at McAlister's Deli, 975 East Goodman Rd. at Swinnea Rd., Southaven, Mississippi.  Our club is open and free to all ages and players of all levels.

Here are clubs that still exist in North Mississippi:

This gathering of hobbyist has been happening at this location for four years this month.

There are many other clubs who welcome even the youngest players; in fact one such club meets on Mondays at 6pm at McAlister’s Deli, 8120 Camp Creek Blvd, in Olive Branch, MS. (https://centerhillchess.shutterfly.com/)

There is no entry fee to play the rated matches, no club membership, no rating fees to collect, and no prizes.

To compete, please join the chess league through CXR for a membership of 7 dollars for a year.  (http://www.cxrchess.com/PlayerSignup1.php?AffiliateID=809)

Oh yes, bughouse chess has been known to happen towards closing time.

Here is a final example of out of town participation:

The Memphis Spring Rating Tournament drew 20 players, among them one from Joiner, Arkansas (Ben E. Therrell), and three from Oxford, Mississippi who commuted each Friday night for four weeks in April for this event.  Mike Bock of Memphis finished first with a score of 4-0; John Ivey of Oxford finished second with 3 1/2 and John Gray of Oxford won third place on tie breaks over Kazi J. Lawrence and Fred R. Lowe of Memphis with equal scores of 3-1.  Carol C. Little directed. (Mary Gray was the 3rd player from Oxford, MS.)


One last note:  Memphis Chess Club's 1981 board of directors recognized the value of the out-of-town regulars and in their defense had this to say:

"It seems that "no-show" syndrome is beginning to reach epidemic proportions.  This often happens when a player has lost a couple of games or is out of money.  As a result he decides not to show for the remaining game(s).  We don't want to force a person to play a game that doesn't want to play, but it's very inconsiderate not to notify your opponent or the tournament director.  Some people come to the club from as far away as Millington, Arkansas, and Mississippi, and that's a long way to drive just to find out your opponent didn't show.  As a result the board of directors voted to enforce a $5 fine for "no-shows." Anyone not notifying both the TD and his opponent a day ahead of time (before the next round at weekend tournaments) will be subject to the fine and will not be allowed to participate in a MCC sponsored event until the debt is cleared.  Hopefully this will help cure the problem.  .  . On a final note, the MCC recently held its annual elections.  .  . So, get involved, call a club officer if you've got something to say, or send a letter to the Chess Advocate - heck, we might even print it.  Remember the Memphis Chess Club is YOUR club!" 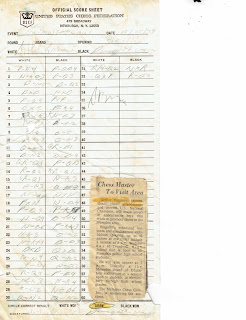 Posted by Chess Advocate at 6:50 PM