"In camp that night, the men of our company indulged in chess, checkers, cards, and other amusements, necessary to relieve the anxieties of the day. As is well known, chess is emphatically a game of war;
(Click "Read more" below.)

and our company contained more than a dozen devotees . . . Among them was our first Captain, H. W. Foote; then, T. J. Deupree, who as First Lieutenant had been in command of the company since the death of Captain King near Florence, was an excellent player; also, Lieutenant S. B. Day, James Rives, Alec McCaskill, Frank Adams, and J. G. Deupree were more or less expert amateurs. There were others, whose names I cannot now recall. By a seeming coincidence, Lieutenant Deupree that night was ordered to appear before a board of officers, presided over by Captain Porter of Memphis, for examination with a view to his promotion. The Lieutenant rode several miles on the pike towards Nashville to face this board. On arrival at headquarters, he was at once challenged to a game of Chess by Captain Porter, who said: "Beat me and I shall add another bar to your collar, Sir." The reader will bear in mind that a First-Lieutenant wore two bars and a Captain three. There was no dodging. Porter opened the game with "Pawn to Queen 4", and proceeded speedily and skillfully to marshal his forces. The Lieutenant replied with "P to King 3", and having much at stake concentrated his mind on the game and likewise proceeded to develop his forces to the best advantage. The game was long and hotly contested. At length, by a judicious sacrifice of a rook, the Lieutenant overreached the Captain and effected mate in a style that would have done credit to a Morphy or a Capablanca. There was no need of further examination. Courage and coolness in action had been tested in actual battle many times, and intellectual power was proved in this game of war. Captain Porter and his board unanimously recommended Deupree's promotion, and thus the Lieutenant became Captain. In this connection, it may be added that he was a favorite of Colonel Pinson's, who when in command of the brigade always appointed T. J. Deupree to a staff position." 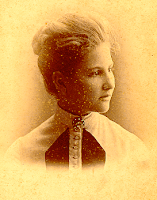 "We were challenged one afternoon by three beautiful and amiable and expert Chess amateurs, Misses Duck Foote, daughter of our first Captain, Judge H. W. Foote, Pattie Lyle, afterwards famous as Mrs. Pattie Lyle Collins of the Dead Letter Office in Washington, and Fannie Lucas, afterwards Mrs. Featherstone of Brooksville, to play a consultation game of Chess that evening at the hospitable home of Judge Foote. In the exuberance of joy, we accepted, knowing full well the great pleasure in store for us. When we arrived, we found all preparations had been made. Two tables and sets of Chess-men had been arranged, one in each of the double parlors. Around one table sat the three queens of grace and beauty while at the other the cavalrymen took their places. Judge Foote, himself a good player also, was chosen referee by unanimous vote; for though we knew his innate gallantry would incline him to give the benefit of any doubt to the ladies, we felt sure his rare judicial temperament would make him a just arbiter of any disputed point that might arise in the progress of the game. By drawing, the ladies won the Whites and the initial move. They moved Pawn to King 4. We replied the same. Shortly after we had passed the mid-game, the cavalrymen by skillful maneuvering outwitted the opposing team and were preparing to give the coup de grace. Each side had a passed Pawn on the seventh rank. It was the Black's turn to play. After some consultation, the cavalrymen decided they would advance the passed Pawn to the eighth rank, claim a Knight, and thus at the same time check the white King and menace the white Queen. But, foreseeing this impending disaster, the ladies executed a novel strategy to prevent it. By the tintinnabulation of a tiny bell, they summoned.  .  . seven foaming glasses of egg-nog, better far, from a soldier's view-point, than the nectar of Olympian Jupiter. The ladies sipped gently, while the soldiers drained their glasses. While there is no positive proof that these last glasses were extra-strong, it is certain that an instantaneous thrill sped along the nerves of the cavalrymen, obfuscated their reasoning faculties, and kindled their imaginations. Caring naught for hazard or peril, they shoved the passed Pawn, and, forgetting their decision to claim a Knight, they called for a Queen, which did not check, as the Knight would have done. This was fatal. The ladies then quietly pushed forward their passed Pawn and very properly claimed a Queen, which checked our King and after a few moves effected a mate. Thus ended the game and an evening of delight. How sad it is now to reflect that I am the only survivor of that most felicitous evening's entertainment!"

"We next went into camp six miles north of Grenada, at Antioch Church.  .  .  When not on duty, the men spent their time in various ways. Most of them were devout believers in Christianity and read their Bibles daily with pleasure and profit. Many indulged in sports of all kinds, a goodly number playing checkers or chess on oil-cloth diagrams spread on the ground, with pieces and men hand-carved, which they carried in their haversacks,"

Link for another blog on the subject: http://blog.chess.com/batgirl/chess-during-the-american-civil-war
Posted by Chess Advocate at 7:46 PM