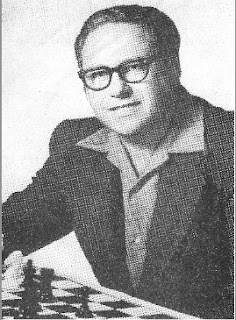 "Arthur Bisguier, International Grandmaster, is the current U.S. National Champion.  He began playing chess at age 5, tournament chess at 12 and was a master at 16.  He won the U.S. Open Junior Championship three times, the U.S. National Championship four times, the Hollywood Pan-American Championship, International Tournaments in Southsea England and Vienna.  He has played on Olympic teams in Tel Aviv, Munich, Lepzig, Moscow and Skopje, Yougoslavia.

He has won against some of the strongest chess players including Fischer, Spassky, Benko, Byrne, Karpov and Larsen and is co-author with Andy Soltis of a new book, American Chess Masters from Morphy to Fischer.

"Six chess players experienced the joy of upsetting an international chess grandmaster in exhibitions sponsored by Memphis Chess Club.  Four players won and two others drew with Arthur Bisguier of Rock Hill, N.Y., the current U.S. national champion.  However, at the time of the exhibition at Raleigh Springs Mall last night, Bisguier was playing 56 chess matches at the same time, club officials said.  He won the other 50.  Mike Bock, 26-year-old Memphis State accounting senior and one of the winners, said it took 29 moves using the French defense to win his game.  Other winners were Scott Smith, also an MSU student, and two persons stationed at Millington, Joseph O'Mera and Marine Sgt. Ron Minor.  Ed Middleton, current Memphis city champion, and 18-year-old Dwight Weaver of Southaven played the draws."

Memphis Chess Club, founded as the Memphis Chess & Checker Club, will celebrate its anniversary November 17-30.  Mayor Wyeth Chandler has proclaimed November 17-21 as "Chess Week in Memphis." Highlighting that week will be the visit of International Grandmaster Arthur Bisguier giving a series of lectures and simultaneous exhibitions.  Climaxing the celebration will be the 16th Annual Mid-South Open, August 28-30."

"While speaking to the USCF national office one day, I happened to be transferred to IGM Bisguier.  I asked what would it take to draw titled players to Memphis and mentioned the Mid-South Open.  Mr. Bisguier said he was going to Crossville in November, and with that, say an exhibition as a sweetener, he might play in the annual after Thanksgiving event.

Later at the Tennessee Open, I spoke to Harry Sabine  . . . still later, I spoke to Mr. Layman of Layman's Games (of Memphis), and voila' -- Bisguier is coming to Memphis in November!

Layman's Games will sponsor a simultaneous exhibition on Friday, November 27th at the Germantown Village Square Mall at a per game fee of only $5.00!  Y'all come on and get ready for the tournament the next day.  Bring your sets!

After the Mid-South Open the Grandmaster-on-staff for the USCF will return with the Crossville Contingent for a week-long educational visit with Crossville's scholastic chess program.  Contact Harry Sabine for information about the east Tennessee stay."  -Jack Smith


"International Grandmaster Art Bisguier showed his strength and experience to convincingly win the 1981 22nd Mid-South Open which was held during the Thanksgiving holiday.  A total of 129 players participated with 75 players in the under 1800 division and 45 in the top group.  David Timberlake of Walnut Ridge Arkansas finished clear second with a 4-0 score and only one loss to Bisguier.

"The tournament again drew Arthur Bisguier, International Grandmaster from NY, and Boris Kogan, International Master from Atlanta, came for the first time. The Georgian Bulldog, as Boris Kogan is called, won the tournament after having drawn Jerry Wheeler in a rook and knight versus rook ending and then beating weary Art Bisguier with similar material to score 4 1/2.  Grandmaster Bisguier had a tough tournament.  The trip from NY to Crossville to Memphis, the exhibition Friday night, and a small disagreement over 3rd round parings, all which served to tire the Grandmaster.  Mr. Bisguier won last year's Mid-South and has brightened the atmosphere at the tournament for the last two years.  It seems that Brian McCarthy had a chance to make master and was due to be paired with the IGM in round three.  However a legal transposition had been made, and Brian was not paired with Art.  Brian protested and asked the Grandmaster if he would mind if the pairings were changed.  Bisguier had already played 8 moves versus Kenny Thomas.  Well, after that the details differ according to the source but finally Arthur took Brian with an arm around the shoulder saying, 'I like this kid; I want to play him.'  Brian drew the game."

Notice:  7 games are  associated with the board below.
Click the "select bar" just above the black chess pieces.


Then there is of course the legendary win by Dale Flickenger in 1984 giving Arthur Bisguier a loss in the first round of that year's Mid-South Open.

Posted by Chess Advocate at 6:51 PM