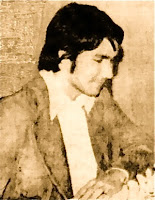 On April 7th and 8th International Grandmaster Larry Christiansen gave two simultaneous exhibitions at Christian Brothers College.  On Monday the 7th, twenty-nine local players were stunned with the speed and accuracy of Christiansen's play.  Nevertheless, the I.G.M. had some close calls and actually lost one game to the team of Paul Linxwiler and Greg Hood, both students at Christian Brothers High School.

The next night, Grandmaster Christiansen played ten games at once without sight to the board.  Here his form was not so good.  I was acting as monitor, and was somewhat surprised at the number of times he confused the positions of two different boards.  This time Memphis players walked away with five wins. 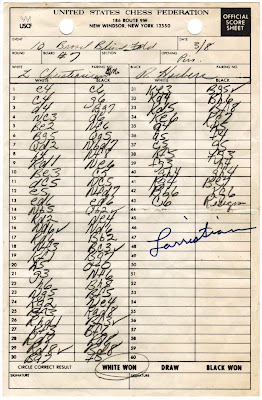 This visit to Memphis by a ranking Grandmaster will be particularly memorable for the press coverage received.  Channel 5 News filmed some of the actual play Monday night giving coverage on the 10 o'clock news.  (Grandmaster Christiansen told me he was exceptionally pleased with the interview he had with Myron Lowery.)  Thanks to the excellent work by the public relations woman at Christian Brothers College, Christiansen appeared on the Good Morning from Memphis talk show, a first for Memphis chess.  Larry's exhibition was sponsored by Church's Fried Chicken and Christian Brothers College Chess Club.  I would like to thank all participants and spectators who made this particular grandmaster event  a memorable one, and I hope Memphis chess will profit from and improve upon the good "press" it received.  --Gregory C. Krog, Jr. President, Christian Brothers College Chess Club.


. . . To add to your list of grandmasters who have graced Memphis with their skill, remember Larry Christiansen, who was brought to Memphis while I was in college at CBC between the fall of 1977 and the spring of 1981. Larry came twice, courtesy of Church's Fried Chicken's sponsorship of American chess. Both appearances were at CBC in their cafeteria in the Thomas Student Center. I think the first was in the spring of 77. The first night he put on a blindfold simul. (I think 12 participants). The next day he played upwards of 40+ players in a regular simul. As part of that same Church's promotion, they also brought Jack Peters, (then an IM), for a regular simul. I think that was during the 79-80 school year while I was Christian Brothers College Chess Club President. --Greg Krog

Six games are associated with the chess-board below.
Click the "select bar" above the Black pieces to choose a game.

Posted by Chess Advocate at 9:00 PM