Chess Emissaries Remembered With Regard

Here we have a few articles that were collected with care by John Hurt, one of Memphis' greatest promoters of the game of kings, and placed in a scrap book, which can be found at the Main Public Library in Memphis.  When there wasn't much chess news, local Memphis newspapers would grandstand a few local area players in outstanding articles.  Now-a-days it is the youth and scholastic players that seem to get the spotlight, but not so in the 1960s.  May these random news stories enlighten and encourage all you aging chess players into staying the course and continue to do what Mr. John Hurt used to be heard saying, "Push Pawn!"

The Mid-South should be proud of 80-year-old Uncle Bob Scrivener who lives at Nesbit, Miss., just a few miles south of Memphis.  http://memphischessclub.blogspot.com/2011/01/uncle-bob-scrivener-story.html

He is the oldest chess champion in the U.S.!

He has been playing chess all his life, and has won many championships–city, state, and sectional.  His greatest triumph in 1961 was the winning of the Mississippi title. 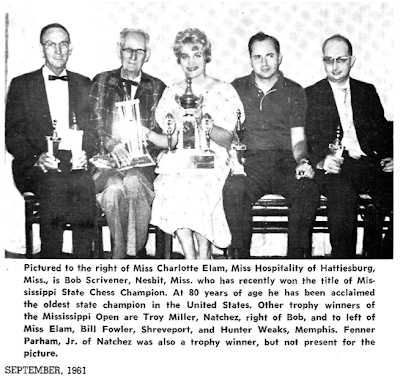 Although Uncle Bob lives in Mississippi, he is president of Memphis Chess Club.  They have members of all ages and meet every Wednesday night in the assembly room of the Associated General Contractors, 320 S. Dudley.  They play from 7 p.m. till midnight.  A serious or tournament match usually takes from four to five hours, but at their weekly meetings many play games in less than an hour.  They just get reckless and move without too much cogitation.

The thing that got me chess minded today was a Christmas card from Uncle Bob.  On it he wrote––

"Dear Eldon:  As your chess emissary, I am proud to report that Memphis chess is booming.  Some really talented youngsters are developing fast and aren't neglecting their school work either.  Witness:  In the last three years, three fine young players have won scholarships (not athletic) to three major colleges.  Another promising young player represented our section in the spelling bee in Washington.

Uncle Bob is a retired executive of Chicago-Southern Airlines (now Delta). He has a 50-acre place with two small lakes, and enjoys country life along with his chess.  He makes about 10 tournaments a year.

P.S.  His statement that three fine young players had won college scholarships aroused my curiosity.  I wasn't sure whether they had won the scholarships because of their chess ability, so I called him and asked about that.  He said, no, the scholarships weren't for chess, but for high grades.  So far as he knows, no college gives chess scholarships, but maybe some college should, by golly!

As a sport, though, I doubt that chess will ever get the support football gets from the alumni.

While most people are burning meat in the backyard or skin at a pool or lake, July 4, 1962, John Hurt will be doing something more exciting.  He'll be locked in combat at the All-Southern Chess Congress in Huntsville, Alabama. They'll be about 150 players from 15 states.  The tournament lasts three and a half days.  Games average four to five hours.

John came to Memphis three years ago from his native West Virginia, representing Consolidated Foods for Monarch and Richelieu products, and has already become a well-known citizen.

He was just elected president of the Northeast Memphis Optimist Club, succeeding Jack Stepherson of the Big Star Stepherson brothers.  John has organized several chess clubs, is three-time Memphis city champion, and president of the Tennessee Chess Association.  He was West Virginia champion four times, has played in the National Amateur three times.  Milam Monick, Jugoslavian Grand Master, who recently moved to Huntsville, is considered strongest in this part of the country, has lost only two games in three years.  John got him two out of four.

A trim 50, John has many other interests––tennis, basketball, drama, music.  He went to Marshall College and lives on S. Perkins with his wife Jane, John III, 14, and Mr. Hurt's mother. 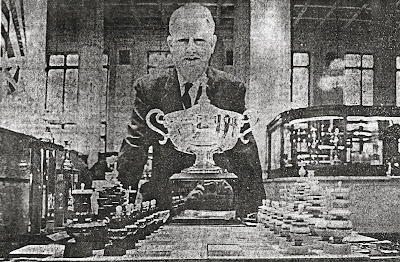 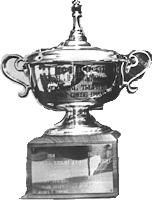 Dudley S. Jefferson, of 1380 Lamar, looks over the Mexican-made ornamental chess set on display at the National Bank of Commerce, of 42 South Second, during the Memphis Chess Club's annual (City Championship) tournament which ends April 9, 1965.  The trophy, which will be inscribed with the name of the (City Chess Championship) winner (each year) and was donated by Mr. Jefferson in memory of his father, the late Bradford B. Jefferson, who was recognized as one of the top chess players in the country.  (B.B. Jefferson won the U.S. Open Chess Championship in 1913, in Chicago, Illinois, and in 1914, in Memphis, Tennessee at the Business Men's Club.  B.B. Jefferson tied for second place in the U.S. Open in 1920, which also took place in Memphis, TN.) 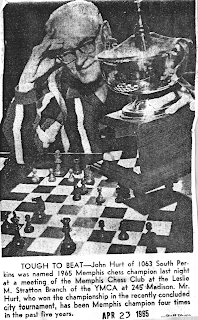 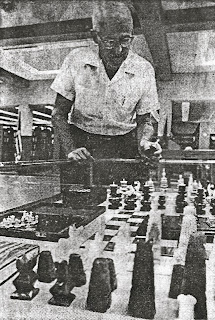 At the Randolph Library Branch, 2752 Given, is a chess display owned by Fred Garner, 5550 Park, president of the Memphis Chess Club.  John Hurt, a Memphis chess champion and organizer of the chess program in city schools, examines the display, which includes a set hand carved-out of ivory.  Several other sets are also collectors items.  Hurt said, "The display is valued in the hundreds of dollars."