0-07⟣ From Memphis With Love ♖♔ 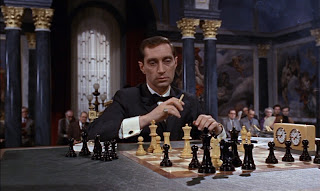 On January 23, 2011, I was watching From Russia With Love, when the chess tournament scene caused me to realize something I had not noticed before.  The chess set that Memphis Chess Club member James Mitchell had sold me in 1985 was a close copy of the one in the James Bond film.

In the 007 film, Grandmaster Kronsteen, from Czechoslovakia, is battling Canadian, Macadams.  The game played out in the film was a variation of an actual game between Boris Spassky, White, and David Bronstein, Black, in 1960.

I do not  recall all of the history of the chess set that Mr. Mitchell owned, except when I first played a game using it.  On November 5, 1976 James and I were paired in the 4th round of the Ralph King Memorial on board 5. The chess set King was just over four inches tall with the base measuring one and three quarter inches.  The pieces loomed over the board, and I lost the game that night.  Mitchell actually finished 2nd in the tournament, with 4 points just under John Hurt, who captured first with 4 1/2 points.   Going forward to the year 1985, I overheard James Mitchell and James Jones negotiating the sale of the set.  Mr. Jones wanted the set in order to replace the Knights for another similar set he owned.  I waited for Jones to leave and then I approached Mr. Mitchell and appealed to him to sell me the set.  I told him I wanted it for a keepsake to remember him by and that I would pay him his asking price.  He sold it to me the next week.  After the set purchase, I ordered a "Texas" size chess board from Ken Smith, Chess Digest, that perfectly fit the pieces.  For years I would randomly show up to the club with this chess set, and it would always receive complements.

One thing James Mitchell and James Wright handed down to me from our club founders was the appreciation of good chess equipment.  Mr. Wright brought a Jaques chess set one night, and I was able to play a game on it.  The pieces were almost perfectly made.  There were rumors at the chess club that the YMCA on Madison Avenue had in storage Jaques sets left there from when the club met at the facility in the 1940s.  I never gave credence to the rumors until one day in the 1970s Randall Senn said he had visited the Madison Avenue YMCA and noticed one of the doors inside the building had these words, "The Memphis Chess Club."  Immediately I thought about those tales of luxurious chess sets that were possibly stored away in the attic or basement and long forgotten.  Still, I have never checked out the rumors.

James Mitchell, for many years, used a Drueke screen printed folding linen chess board with green and buff squares.  Drueke linen boards are no longer in production, but I have one which I still use on occasion.  The plastic Drueke "Paladin" chess sets were almost a standard at the chess club back in the 1970s and were used in the 1966 U.S. Open.  My parents bought me my second plastic chess set, the "Cavalier" style, in 1973.  The "Cavalier" was used in the 1967 U.S. Open.  I did not purchase a good wooden set until 1984 when I ordered the "Indian" design chess set from the USCF.  All of the sets mentioned above are of Staunton design. 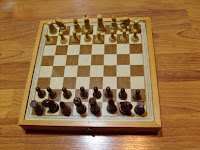 Some of the best players in the Memphis Chess Club still own various styles of fine Staunton chessmen, but you rarely see them brought out for tournament play.  Hunter Weaks was said to have many ready for use in almost every room of his house, even one in the kitchen. I have had a good magnetic travel set, since I learned the game, and it used to attract game challenges from inquisitive chess players while I was out of town vacationing.

My first chess set was given to me in the mid 1960s where it was stored in my room's closet unused until December of 1972, when a neighborhood friend taught me the game during Christmas vacation.  I still own the set though it is too small to be used in tournaments.

The best set I have seen lately, that I have appreciated with awe, is Oleksandar, "Alex," Sytnytsky's.  I had the pleasure to use Alex's set when we were paired in the Memphis City Amateur in January of 2011.  His chess set gives the appearance of amber.

Now-a-days you can come to chess clubs and tournaments and see that somehow simply playing the game has taken precedence over the pleasure of good chess equipment.  It is not uncommon to sit at a chess board with the White pieces having three or four different shades and the Black side with various pieces wielding a gloss or matte finish.  James Mitchell, with his careful centering of the pieces, his Alpha or Jerger mechanical clock, his folding linen chess board, and his finely varnished wooden chess set would seem very much out of place today.

Posted by Chess Advocate at 9:32 PM