The name Oliver Tai is probably unfamiliar to many of you in the chess world of the 21st Century, but in the 80s and 90s he was one of the most promising, up-and-coming chess prodigies to ever come out of the Memphis Chess Club.  Oliver's last USCF tournament was the National U.S. Amateur Team East in Parsippany, NJ on February 22, 1994.  He finished number 93 out of 898 players with 4 1/2 points out of 6.  His last rating was 2157.

I first met Oliver at the chess club around 1987, and he was a nice, quiet fellow about the age of twelve at the time.  My recollections of young Oliver would not do him justice, so below are most of the articles that I could find concerning his chess career.  He indeed was a legend in his time, and in the first article, you can learn from him. If your club attendance is low and in need of fresh new faces, Oliver shows you how to promote the game of chess to the public.


Here are the articles in various order:

From the Commercial Appeal, 1990
by Dave Hirshman


Chess Whiz, 14, Drills Challengers by the Dozen in Quiet Showdown 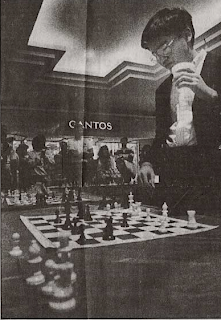 Child prodigy Oliver Tai checkmated Oak Court Mall visitors Saturday a dozen at a time.  The 14-year-old chess master strolled from one challenger to the next for four hours Saturday afternoon, dispensing humility.

If he hadn't been in the mood for chess, the junior at Memphis University School could have put on a martial arts demonstration.  He's a black belt in Taekwondo.  Or do a concert.  He's an accomplished violinist.  Or a lesson in higher mathematics.  He had nearly a perfect score on the math portion of a college entrance test when he was 10 years old and passed the Advanced Placement calculus test during the ninth grade.

"He might be able to become another Kasparov or Karpov if he wants to," James Jones, president of the 40-member Memphis Chess Club, referring to the two Soviet Grand Masters who recently wrapped up their battle for the world chess championship.  "But he'd have to devote his life to it, and he wants to be a physician, " Jones said.

Tai's opponents Saturday varied widely in ability.  But the Germantown, Tennessee resident said he was confident none would beat him.  "I don't think I'll lose today.  At least I hope I don't, " he said.  "As a straight question of probability, it's not very likely."

Tai's sister Stephanie taught him to play chess about seven years ago.  "Once I showed him how the pieces move, it wasn't long before he started beating me. It was pretty depressing," said Miss Tai, at 17 already a junior at the prestigious Massachusetts institute of Technology.  Miss Tai spent the afternoon shopping at the mall and watching the chess demonstration with her mother and father ––  who have doctorate degrees in physics and chemistry, respectively.  "She didn't know she created a monster," nodded Christine Tai, their mother.

Keith Macon, 24, a mall security guard, was Tai's first victim.  The checkmate and perfunctory smile and handshake came after about 20 moves.  "I let his knight and queen move in on me, and the queen set me up," the bewildered Macon said.

Greg Krog, 31, an assistant district attorney, went down in 22 moves.  "I blundered the opening, dropped a knight, and it all went  downhill from there," he said.  "The kid is definitely sharp."
Please click "Read More" below to continue with more on this article:

Once again records fell as 390 enthusiastic young chess players gathered in Crossville, TN for the 1983 Crossville Scholastics.  The tournament was the largest of any kind ever held in Tennessee and was one of the largest ever held in the South.

Forty-six teams and individuals representing 63 different schools competed for the 95 trophies and $500 in cash prizes awarded.

Grandmaster Arthur Bisguier was once again the hit of the tournament, playing over 75 participants in a Friday night simultaneous and analyzing game and giving lectures to the young students throughout the tournament.  The tournament was sponsored by the Cumberland County Chess Club and the American Chess Foundation and directed by Harry Sabine, Chief TD and a host of other volunteer workers.

The Auburndale Chess Club of Cordova, coached by Dale Flickinger, has 125 members, which represents 18% of the school's enrollment!  Since its beginning in 1981, the Elementary Team has grown into a National power.  This article will serve to introduce those who aren't aware of the stuff that comprises a championship team and will indicated just how deserving Auburndale is of its acclaim.

A listing of other pertinent accomplishments:  Auburndale has won the Elementary State Title three (3) times in a row.  In four years, Auburndale and its representatives have won over 300 trophies.  In simuls, Oliver Tai has defeated GM Arthur Bisguier, and 5th grader Craig Klein defeated IM Sunil Weeramantry.  Only one Auburndale elementary player is a 6th grader . . . watch out next year!!

There are many standards by which to measure the growing success of the National Scholastic championships – the quantity of participants, the level of competition, the attention and excitement in the media and in the community, or the level of corporate and community sponsorship to the event – in all of these areas, the 1988 events far surpassed earlier achievements.

But there is an underlying foundation for this success that is growing in depth and breadth and strength each year – the adult volunteers across the nation who coach, organize, coordinate, fund-raise, promote, and do much more – all because they believe in the value of scholastic chess.  This dedicated, hard working group is the key to our current success – and yet they rarely receive much credit.

The volunteers who take on the organization of a national scholastic can count themselves among the most energetic and courageous of all. This year (1988), the cities of Albuquerque, New Mexico,  Detroit, Michigan, and Memphis, Tennessee did themselves proud in hosting a total of 2144 young chess players – over 300 more than at last year's record-breaking events . . .

Numbers, however, tell only part of the success stories of these events.  Planning and organization for these undertakings began almost two years before the event.  All of the organizers performed admirably, particularly in learning from the mistakes and accomplishments of past nationals.

This tournament, which hosted 548 players, was held in three sections: Kindergarten through 9th grade; Kindergarten through 8th grade; and the Junior Varsity section, which is open to players 8th grade and under who are rated under 1300 b the U.S. Chess Federation.  The tournament's attendance was surpassed only by the events in Terre Haute in 1983 (576) and 1985 (631).


Gaston Scott and Dale Flickinger of Memphis were the chief organizers.  Chief Director was Bill Snead of Amarillo, Texas.  He was assisted by Harry Sabine, Bob Tanner, Dale Flickinger, Paul Linxwiller, Kenney Keck and many others.  (Blog Editor's Comment: The "many others" (assistant Tournament Directors) not mentioned in Chess Life: Mark Ishee, Bill Orgain, Wayne Bell, Dewain Barber, Ellis Jones, Dwight Weaver, Randy Senn, Charles Dangeau, John (Mike) Fore, Garry Newsom, Terry Horgan, Ramadas Kini, Tracee Lee, Shannon Cohen, Sean O'Daniels, Brad Bradley, Dan Bongard, Thomas Davis, Chris Albonetti; Note: Memphis area chess clubs such as the Memphis Chess Club,  Horn Lake Chess Club aka N. MS Chess Club and the Pillsbury Chess Club were represented at this tournament by their TDs. One other assistant TD not mentioned in the official documentation was Steven "Steve" Shifflett from the Horn Lake, MS Chess Club.  During one of the rounds, Steve was able to "lay down the law" to one chess coach in the playing area who was illegally readjusting one of his student's chess clocks long after the game had been in progress.  I worked out a few incidents myself during the tournament, but one chess coach thanked me for what he thought was a friendlier group of floor TDs than he had experienced in other parts of the country.)

Much has been written about the young Oliver Tai in recent chess publications, and with good reason.  His talent for the game is genuinely extraordinary.  His resume' of tournaments and titles won is as long as it is impressive.  Oliver has been the "defacto king" of scholastic chess in Memphis for years, and he has at least tied for first (if not outright WON) all of the different sections at the rigorous Crossville Scholastics.  Only the Tennessee High School State Championship has eluded his conquering of regional scholastic events. (Blog editor's note: Oliver Tai won the TN HS State Championship title in 1990 and he was co-champion in the same event with Mark Cobb in 1991.)

Tai, having just celebrated his twelfth birthday, enjoys a 2114 USCF rating.  Many questioned if this rating realistically reflects his playing strength since many of his rating points have been earned against scholastic players, a group whose ratings are notoriously over-inflated.  Tai himself has put many of these doubts to rest by successfully qualifying for the City Championship (usually an all-adult field) for two years in a row.  More astonishingly, Oliver has defeated the last three Masters he has encountered in Over-The-Board play.

Although Oliver recently failed in his bid to win consecutive National Junior High School titles (In 1988 he fell a 1/2 point short of the winners in Memphis, Tennessee), he is someone who will undoubtedly continue to add to his already unbelievable list of titles.  We in the chess community will doubtless hear much about him in the future.

Click the bar above the Black pieces on the board below to select each of the 3 games played: